The watch company Jacques Etoile was founded on October 1, 1996 in Lörrach/Baden. While the father Horst Jakob, an experienced watchmaker, who in 2001 celebrated his 50-year master anniversary, works quite in the silent background at the technology and the models, his son Klaus maintains external relations, including business and customer contacts and trade fairs. Not to mention the Turkish wife of Klaus Jacob, whose name Yildiz (English Star, French Etoile) contributed to the naming of the brand.

Jacques Etoile should not be confused with the historic Etoile watch brand or the modern Etoile nameplate used since 1986 by Swiss-Italian, Stefan Hafner.

The start of a young watch company

After one had begun with the two product lines Imperial and Racing - these were chronographs with the ETA-standard movement Valjoux 7750 - Klaus Jacob could secure a handful of beautiful old Valjoux column wheel chronograph movements that have been incorporated into the series Silverstone. Sales increased, when the model Plongeur was released, a low-cost dive watch with solid bracelet for just 700 D-Mark. 1997, on the watch and jewelery fair in Basel, Japanese journalists were interested in the watches, and in the beginning of 1999 an invitation to Japan followed. Although Klaus Jacob had expected only introductory talks, he received orders in a stately extent. 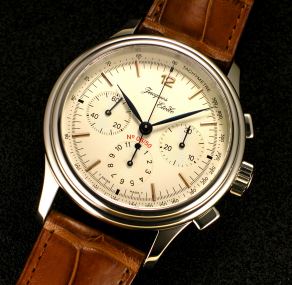 This success made it possible to considerably expand and enhance the watch range. An important component of the corporate philosophy has been to provide mechanical specialties that go beyond the usual mass standards. These include rare or unusual movements such as the historic column wheel caliber Venus 175, the form movement by Jaquet Baume used in the rectangular Estes Park, the proven Unitas pocket watch Calibre 6498, the unusual movement Unitas 6300 with real central seconds or the Tourbillon movement by Progress.

Even if such a widespread and well-known movement as the ETA Valjoux Calibre 7750 is used, there is an additional conversion effort to offer the harmonious Tricompax arrangement of the totalisers or, as in the model Grand Guichet, to achieve a instantaneous switching big date display.

For the tenth anniversary of the founding of the company, on October 2, 2006 the limited edition model Bidynator 42 was presented, which, in memory of the legendary, bi-directional self-winding movement Bidynator by Felsa, contained remnants of these historic calibres.

In the meantime there is now, parallel to Jacques Etoile, the secondary brand Mercure. This covers the price range under 1,000 EUR. The motto of Klaus Jacob reads Classical mechanics with proven Swiss movements with German finish at prices like 25 years ago.