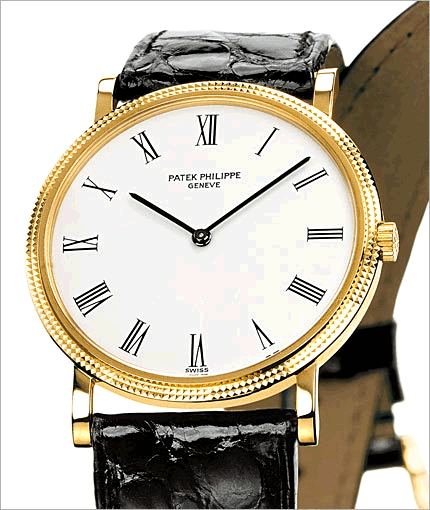 Patek Philippe makes a successful line of dress watches in Bauhaus style with Clous de Paris guilloche around the bezel.

In 1973, Patek created a modern classic Calatrava, Ref. 3520, with a round case, straight lugs, and “Clous de Paris” or “hobnail” bezel. This simple 2-handed watch spawned a family of watches, larger and smaller cases, quartz and automatic movements, and complications.

The original Ref. 3520 was an immediate success, so Patek Philippe added additional members of the family. A larger model (36 mm instead of 32 mm), Ref. 3590 also added an automatic movement. The quartz Ref. 3744 was very similar to the original in size and appearance.

Another unusual member of the family is the Perpetual Calendar, Ref. 5139. It looks just like the contemporary Calatrava models but adds a perpetual calendar and is does not use the Calatrava name.

Due to the success of the original Ref. 3520, Patek Philippe applied Clous de Paris to other models in the Calatrava family. These models are not directly in the classic Bauhaus line but are essential to the importance of this design to the company.