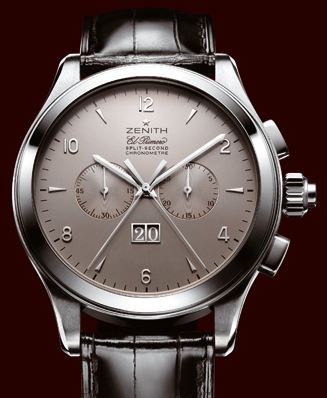 A rattrapante chronograph has two chronograph seconds hands which can be stopped independently.

Also called split-seconds chronograph or Doppelchronograph, a rattrapante has two seconds hands for the chronograph function that move together. The extra hand can be stopped independently by pressing a button in order to measure lap times. After another push of a button it will bounce back under the chronograph hand to continue in conjunction with it. In this way, the measurement of other intermediate times becomes possible. This is the origin of the word “rattrapante”, which is based on the French verb “rattraper,” meaning “catch again”.

Rattrapante chronographs are regarded as particularly valuable because of the demanding complication; certain historical models are coveted by collectors and connoisseurs. For example a rattrapante wristwatch by Patek Philippe, produced in 1922, was auctioned at Antiquorium on 14 November 1999 for US$ 1,918,387. At that time this was the highest price ever reached for a wrist watch in an auction.

Unlike the rattrapante or split-seconds chronograph the flyback or mono rattrapante uses just one hand for lap timing. Conversely, the double rattrapante has split minutes and seconds hands for timing longer than 60 seconds.

The doppelchronograph was invented in 1831 by Joseph-Thaddeus Winnerl, who added a heart-shaped cam to his improved version in 1838. In 1923, Patek Philippe produced the first wristwatch chronograph rattrapante, and the company still specializes in this complication.

Blancpain and their sister movement producer Frédéric Piguet are credited with bringing back the split-seconds chronograph as a fashionable complication. Their 1988 FP 1181 and FP 1186 movements were part of the “six masterpieces” concept championed by Jean-Claude Biver for Blancpain. These were later offered to other companies after the acquisition of both companies by SMH in 1992.

In 1991, IWC introduced the first mass-market doppelchronograph. Their IWC Double Chronograph used a Valjoux 7750 base with added complications designed by Richard Habring. This lasted in production for many years and the design has proliferated after the IWC patent expired in 2012. Chronoswiss and Ulysse Nardin also built split-seconds chronographs on the 7750 base in 1992.

A. Lange & Söhne was the first to produce a watch with split minutes and seconds hands. Their 2004 Double Split Cal. L001.1 remains an unusual and desired complication.

Terms, Rattrapante chronograph movements
We use cookies and other tracking technologies to improve your browsing experience on this website and for data collection for personalized ads.More information
rattrapante_chronograph.txt · Last modified: 11.10.2021 17:01 (external edit)