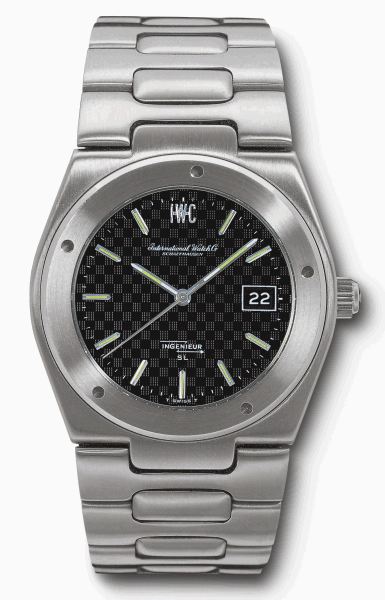 The Ingenieur had become somewhat stale by the mid 1970s but famed designer Gerald Genta had shown a stylistic path forward with his groundbreaking Audemars Piguet Royal Oak in 1972. Genta designed three “SL” or “Steel Line” watches for IWC, of which only the Ingenieur was presented for sale. The production “Ingenieur SL”, introduced in 1976. Like the Royal Oak, Patek Philippe Nautilus, and Vacheron Constantin 222, the new Ingenieur SL had a “sandwich” case, with both the caseback and bezel being removable. But unlike those others, the Ingenieur used a novel approach The Bezel and crystal were screwed in place like a screwed caseback using five “bores” spaced around the circular bezel. This resembles the Royal Oak's screws but is significantly different technically.

The new case was much larger than previous watches, with an integrated bracelet and tonneau shape. Measuring 40 mm by 38 mm around a 30 mm dial, the “Jumbo” nickname seemed appropriate for the time. Some even called it “Fat” thanks to the 14 mm depth of the case.

The lumed sword hands remained, but the dial was updated with simpler bar markers on the hours and tiny bars on the minutes between. The dial gained a checkerboard guilloché pattern said to resemble graph paper. All models feature a date window at 3 00 and the “INGENIEUR” logo above 6 00 gained the initials “SL”.

The Ingenieur SL was again available with a steel or gold filled case as Ref. 1832 (automatic) or Ref. 3003 (quartz). A 18 karat yellow gold model with steel caseback was Ref. 9232 (automatic) or Ref. 9503 (quartz). All models came with a matching bracelet. The steel models were water resistant to 12 ATM while the gold models were only good to 6 ATM. Some examples were converted to quartz or automatic during production or after sale.