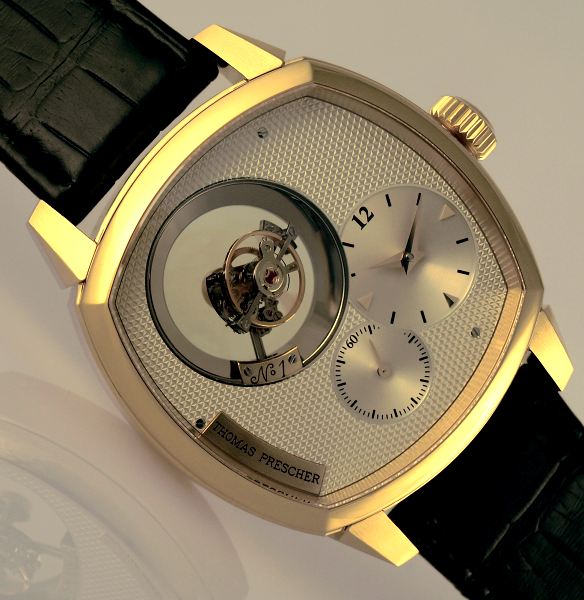 In the seventies of the last century, the Briton A. G. Randal invented a tourbillon, which rotated around two axes. Referring to the position problem, he built the mechanism — probably more as an intellectual challenge than in terms of rate improvement — into a large table clock.

In a double-axis tourbillon, the second axis rotates parallel to the dial and positively influences the rate even in the dial-up and dial-down positions. Thus, the mechanism has a beneficial influence on the rate of all six positions.

Since the double-axis mechanism can develop its full effect only in portable watches, Thomas Prescher realized such a mechanism in a pocket watch to test the later feasibility of his vision in a wristwatch.

A direct reduction in size and the same arrangement of the components proved to be impossible. The problems of weight distribution, gearing and friction in micro-mechanisms led to quite different reactions than in Randal's large watch, since the smallest part in the new mechanism weighs only 0.0009 grams. Thus, the tourbillon had to be completely redesigned, especially because it was furthermore intended to be a flying tourbillon.