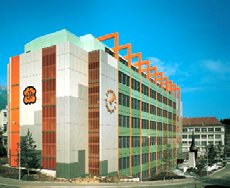 ETA SA Manufacture Horlogère Suisse (commonly called ETA) is the best-known Swiss ebauche movement manufacturer. Part of the Swatch Group, ETA traces its lineage to 1793, though the name dates only to 1923.

The ETA name is first seen in advertisements in January, 1923. Ebauches from the Schild Frères factory in Grenchen had previously been advertised as coming from Eterna but were now listed as “Fabrique d'Ebauches ETA” with at least eight movements offered.