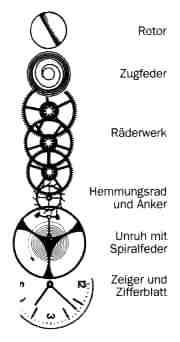 Drive mechanism of a watch

Who invented the watch movement?

The following discussion is intended to illustrate the basic principle of a mechanical watch. Strictly seen it does not apply to all types of watches and constructions, because there can be several differences. But the basic idea remains the same, because the watch has not been invented by a single person, but has continuously evolved, refined and improved over several centuries by a number of contributions. One can look at the watch, therefore, as a concerted development effort of all mankind.

The process of power transmission from winding to the hands

Consider first the image shown at the top right-hand corner. For reasons of clarity the drive mechanism is lined up from top to bottom - one wheel is driving the next.

With automatic watches the transmission begins at the rotor, which makes use of the forces caused by movement changes at the wrist and transfers it to the mainspring and the barrel. Or in manual winding watches the force is generated by manual winding.

The translation to the individual hand displays

Illustration of the gear train

The going train translates the momentum into the different speeds Seconds, minutes, hours, etc. The picture on the left hand side shows the translation scheme of the gear train

Escapement wheel and lever meet the back-and-forth swinging balance wheel, which is pulsating at the balance spring. The principle of the escapement is explained below in more detail. 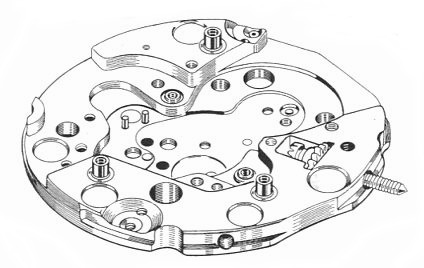 In this picture a movement plate (main plate) is shown in which the gears of the gear train and barrel, balance wheel and so on are fitted. To reduce the friction the shafts of the wheels are fitted in so-called jewels.

Illustration of the order of the drive force

From a spatial perspective, as shown in the next picture, the drive mechanism is lined up from the barrel (left) to the balance wheel (on the right). 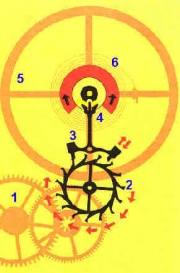 The characteristic ticking of a mechanical watch is the acoustic feature of the oscillation and escapement system of a watch movement .

The exact rate is based on the maximum possible uniformity of the back-and-forth oscillation of the balance wheel [5], which must also be balanced as accurately as possible.

Without a steady, precise dosed energy supply this regulated organ however would cease to move. Therefore, it is constantly fed by the force coming from the barrel and via the gear train [1], in accordingly reduced doses. The escapement transfers this force via the escape wheel [2], the lever [3] and roller [4] further to the oscillation system. In a sophisticated flow by inhibiting and releasing the lever grips into the escape wheel in such a way that the movement is always pulsating in the same measure of time (see animation on the right hand side).

Terms
We use cookies and other tracking technologies to improve your browsing experience on this website and for data collection for personalized ads.More information
movement.txt · Last modified: 11.11.2021 12:40 by gerdlothar