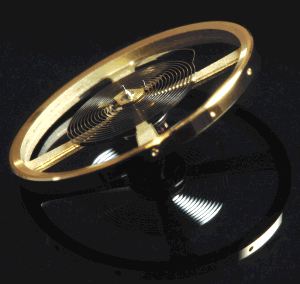 Balance wheel
of a wristwatch

A balance wheel is part of a watch movement.

The balance wheel is the heart of the oscillating system of a compact portable timepiece such as a wrist or pocket watch. The vibration of the balance wheel is used to measure time and is one of the main specifications of a movement. The balance wheel produces a temporally-defined movement, rotating back and forth, which is then transmitted through the gear train of the watch movement into a movement of the hands. It serves the same function as the pendulum in a clock, but is much more compact and works largely independent of the position of the watch.

The balance wheel was developed by Christiaan Huygens, and he was granted a French patent in 1675 for this purpose.

One major historic issue with balance wheels is the fact that changes in temperature can affect the accuracy of the movement. For this reason, a major area of research and development throughout the 20th century revolved on improved balance wheel materials and construction. Bi-metallic balance wheels were popular in the prewar era, but the development of Nivarox and Glucydur balance wheels in the 1950's has led to the dominance of solid wheels today.

The balance wheel is set in a shaft journal of semi-precious stones to reduce friction and energy usage by the movement.

To maintain its oscillation, the balance wheel escapement is periodically excited by the by the mainspring.

The balance wheel can also be regulated by changing the effective length of the balance spring There is typically a lever that can be rotated to change the frequency of the wheel.

The balance is typically regulated using a sound microphone which “listens” to the balance wheel's rotation and produces a graph of the wheel's frequency.

Because the balance wheel is constantly in motion, it can easily be damaged by shocks transmitted through the case. For this reason, most modern movements include a form of shock protection. The bearing stone is set in a spring which can move in response to a shock, temporarily interrupting the wheel but protecting the journals from damage. See for example Kif and Incabloc.

Because pocket watches were typically kept in a fixed vertical orientation, their balance wheels were especially susceptible to the effects of gravity. For this reason, the tourbillon (“whirlwind”) was invented to rotate the balance wheel continually during use.

Today, tourbillon balance wheels are found in the most exclusive and exotic watch movements.