From the ladies' watch to the watch for men

The first wristwatches came late 19th and early 20th Century. Until then, men had worn their pocket watches on a chain in the vest pocket, whereas women had them on a chain around their neck. In performing daily work, however, the shortcomings of these ways of carrying method showed. Not infrequently, a ladies' watch worn on a chain dipped into the pot while cooking.

So the fashion emerged to wear the women's watches by a bangle with clip on the wrist. Later, for better readability the dial was offset by 90° and bars solded at the case, to be able to attach bracelets. This fashion was initially considered by men as “effeminate” - men still continued to use the pocket watch at the watch chain. 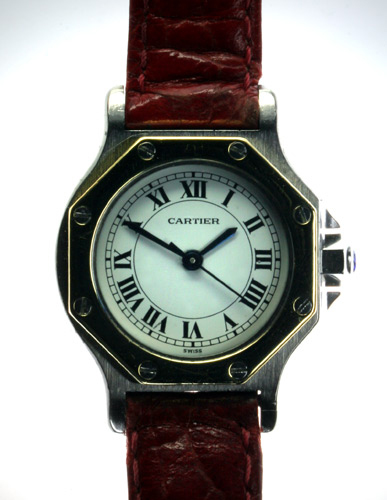 Only aviation brought the breakthrough for men's wristwatches the Brazilian aviation pioneer Alberto Santos-Dumont inspired his friend, the Parisian watchmaker Louis Cartier to build a watch for pilots, which was worn on the bracelet So the Cartier Santos became the first wristwatch for men.

Also the officers in World War I had discovered, that their pocket watches were very impractical in the winter and generally under combat conditions. So the wristwatch won through quickly in the military and finally also in the civil society. At war's end, it quickly became the general standard.

The perfectioning of the wristwatch

Hans Wilsdorf, founder of the now so famous watch manufacture Rolex, has the merit of having worked systematically at the perfection of the wristwatch. Because long before his competitors he recognized the future of this new watch genre. Till then, wristwatches hat not been particularly robust and reliable, because at the wrist of their wearer they were at the mercy of the effects of dust, moisture and vibrations - now it was mainly about making the watches more resilient and practicable than the then-standard pocket watches.

Wilsdorf developed the world's first patented waterproof watch, which was presented under the name “Oyster”. The case was milled from a single solid piece of steel. Caseback and crown were screwed in. The watch glass sat tightly and accurate to guarantee the full protection of the watch movement. Even with the marketing of this new type of watch Wilsdorf trod new paths. As the swimmer Mercedes Gleitze on 7 October 1927 crossed the English Channel with a Rolex “Oyster” on her arm (it is also said on the neck), Wilsdorf placed a full-page ad on the front page of Britain's Daily Mail, and the watch was at once known to the general public.

The next step was the development of the automatic winding, which Rolex brought to market in 1931 in the form of the famous “Perpetual”. The principle of a freely rotating weight segment, by which a uniform tension of the mainspring can be achieved, has since been accepted as suitable for mass production on a broad front.

More on this topic