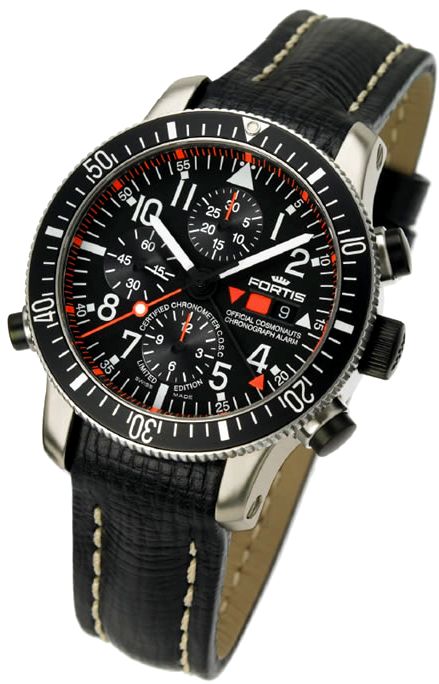 Official Cosmonauts is a series of pilot's watches or space watches by Fortis.

The space watch from Fortis

Since 1994 Fortis is official watch supplier of the Cosmonaut Training Center Yuri Gagarin A.. The watches are subjected to hard tests to deliver their service in space with the utmost reliability and resistance. Thus, the model Official Cosmonauts Chronograph was worn by Russian cosmonauts in space and proved that watches with automatic winding are fully compatible also in this environment. The good quality of the chronographs was confirmed by the Russian Space Agency and the Training Center Star City with the embossing of their official emblems on the caseback.

On September 10th, 2001 the Fortis CEO Peter Peter received the medal “Star of the Blue Planet” at a meeting of the international space agencies in Paris. This award, given by the Russian Space Agency Rosaviakosmos for his involvement in the development of mechanical chronographs for the aerospace industry, has been previously awarded only five times to non-Russian personalities.

Since 1994, the set is part of the official equipment of the cosmonauts. The high-quality leather set bears the official emblems on the obverse.

To the set equipment belong watch with steel bracelet, leather strap, Velcro or rubber strap, special tool to change as well as a metal box for storage of accessories.

Watch models, Fortis models
We use cookies and other tracking technologies to improve your browsing experience on this website and for data collection for personalized ads.More information
fortis_official_cosmonauts.txt · Last modified: 11.10.2021 16:35 (external edit)