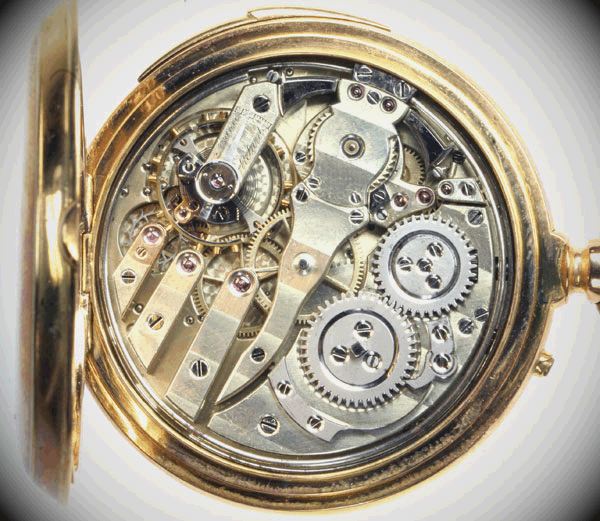 Repetition means the repeated playing of an acoustic signal at a clock or watch. In mechanical watches this requires a special, expensive additional mechanism (complication), the repetition carillion (see below).

Repetitions are well known by the sounds played by church tower clocks (Big Ben, for instance).

Essentially there are repetitions of the following type:

Due to the high mechanical effort repetitions are regarded as one of the most value-adding complications in a mechanical watch.

To represent the time acoustically, the carillion (or chime movement) needs power. This it activated by the operation of a slider or pusher at the case edge. At the same time, this process also triggers the percussion mechanism. If pusher or slide have not been moved to the stop, simple repeaters beat the time incompletely. In fine constructions this is prevented by a so-called all-or-nothing switch. They then repeat properly or not at all.

The most famous melodies

This chime originally comes from the University Church in Cambridge and is taken from a composition by G.F. Handel. However, this short melody has become world famous as the hour strike of the bell tower Big Ben at the Parliament in London.

Named after the important mayor of London Dick Whittington, who in a difficult hour allegedly heard his appointment as mayor in this sequence of sounds.

This chime is named after St. Michael's Church in Charleston, South Carolina. During the War of Independence and the American Civil War, the bells of this church came to harm several times, were restored in London, and finally 1867 were ceremonially reinstalled.

Terms
We use cookies and other tracking technologies to improve your browsing experience on this website and for data collection for personalized ads.More information
repetition.txt · Last modified: 07.11.2021 15:59 by gerdlothar