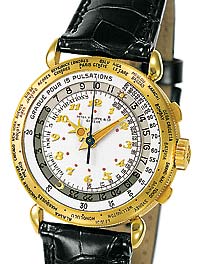 A worldtimer watch is one that displays all timezones simultaneously.

Worldtimers (also called world time watches or world timers) are watches that, like GMT or dual time zone watches, can show time in more than one time zone simultaneously. However, GMT and dual-time watches only show two locations while a worldtimer shows many time zones at once. Most worldtimers use a disc with labeled timezones, often in the inner dial or outside the main dial near the bezel. Others have unique complications, such as the globe integrated into the Greubel Forsey GMT.

Worldtimers often include a day/night indicator since it can be confusing to know whether it is early or late in a given location. Some also include quick-set complications, allowing the local time to be adjusted as the wearer travels across time zones. A few worldtimers are capable of displaying the half-hour timezones in locations like India. It has become popular to use specialty timezone labels according to the theme of the watch For example, the Jaeger-LeCoultre AMVOX5 World Chronograph uses “Gaydon” (home of Aston Martin) rather than “London” or “GMT”.

Based on the Greenwich prime meridian (GMT), every 15 degrees of longitude the time shifts to a full hour. This world time system was first introduced in 1883 by Canada and the United States, because with increasing development of the railway traffic, the time shift became more and more noticeable.

Watches with world time indication show multiple time zones on one dial. World time wristwatches, which have existed since the 1930s, have become increasingly popular for long-distance fliers and business people who often need to make calls over long distances or have to take into account the stock status of international financial centers.

There are a number of different ways to show “world time”. For example