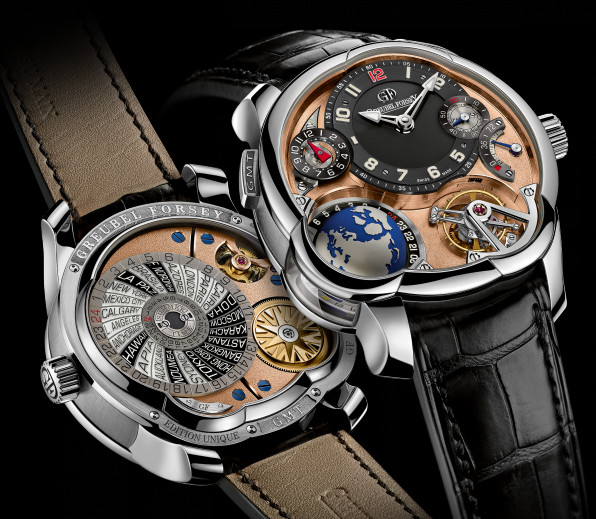 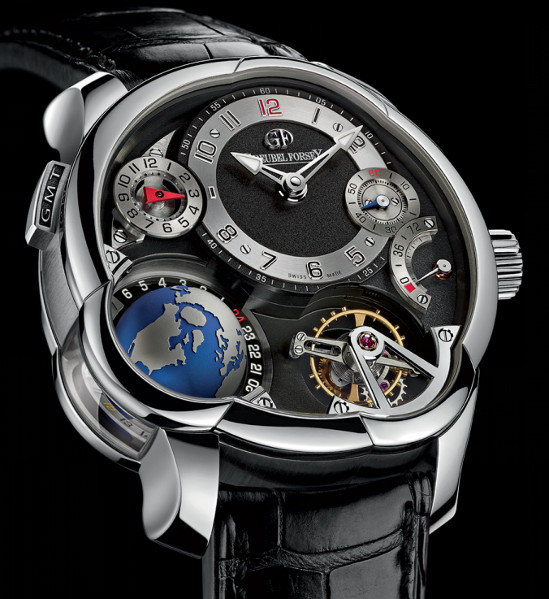 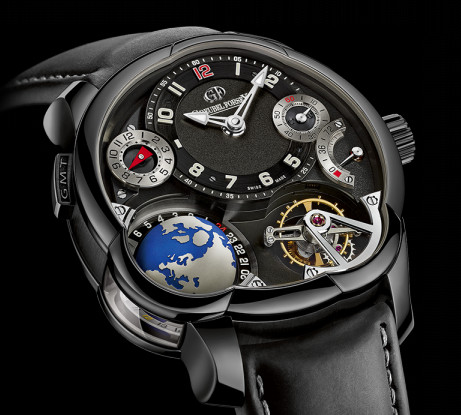 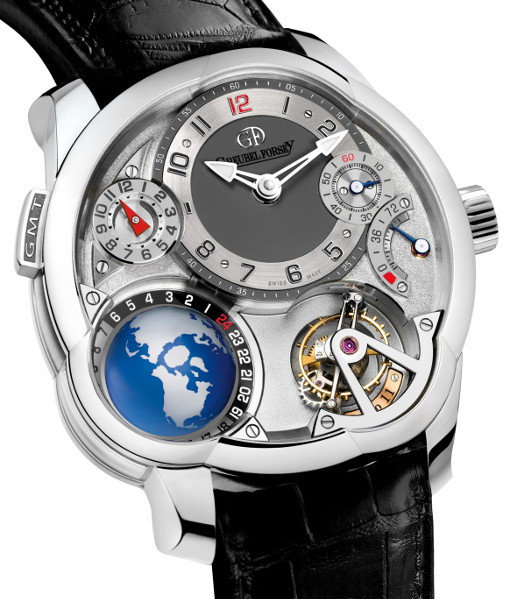 GMT is a wristwatch by Greubel Forsey.

This timepiece marks a first for both Greubel Forsey and the history of GMT watches. After exploring, inventing, and developing new mechanisms in the world of the tourbillon over the last decade, Robert Greubel and Stephen Forsey have now combined it with a new complication, the GMT, which they have naturally interpreted in their own way.

With this remarkable timepiece, Robert Greubel and Stephen Forsey have focused their energy on indicating a second time zone, a complication traditionally denoted by GMT (Greenwich Mean Time), the historical reference meridian for navigators.

A highly-practical complication and one greatly-valued by connoisseurs, a second time zone is of particular benefit for globetrotting businessmen, frequent leisure travellers and those with family and friends around the world.

True to their philosophy and continuous quest for perfection and innovation, Greubel Forsey have gone way beyond the conventional means of displaying a second time zone. The GMT features a wonderful, three-dimensional temporal representation A rotating terrestrial globe offering a truly original view of time all over the world. This technical yet poetic marvel provides us with a completely new way of perceiving the different time zones.

Nestled in a prominent position at 8 o'clock, the ‘flying' globe is ingeniously secured at just one end of its rotational axis – the South Pole – allowing for optimal views of the intricate surface that has been crafted on the strong, yet lightweight, titanium sphere.

While the globe makes one complete rotation every 24 hours anticlockwise – the Earth's natural rotational direction – the position of the continents can be neatly cross-referenced with the 24-hour, day-and-night indicator on the equatorial chapter ring.

So if it is midday in England, the viewer can see at a glance that it is the beginning of the afternoon in Geneva or Rome, that the sun is only just rising on the East Coast of the United States and that the darkness of night has fallen over the Far East. Just one quick glance is enough to know the time anywhere in the world – a longer look and it will be for the sheer aesthetic pleasure of viewing the delightful details on the intricately crafted globe.

The intuitively interpreted globe is complemented at 10 o'clock by the 12-hour second time zone dial giving a precise indication of the time in a designated second country or city and is easily adjusted using the quick-set, dual-function pusher on the caseband at 10 o'clock.

Cascading clockwise around the dial-side are the main indications comprising a principal hour-minute dial at 1 o'clock, on top of which is a small seconds dial at 2 o'clock, while at 3 o'clock is a sectorial power reserve indicator.

The specially developed movement of the GMT features the 25° inclined Tourbillon 24 Secondes cage, one of Greubel Forsey's major patented inventions. In addition to its superb chronometric virtues and reliability, its compact size allows space for the other complications.

Spatially, the combination of elements on the dial-side is perfectly balanced, with a striking sense of depth offered by the globe and by the Tourbillon 24 Secondes at 5 o'clock which together form a triple asymmetry giving rise to a controlled tension that plays subtly with the circularity of the case, while never totally rupturing it.

Turning over the GMT reveals the beautifully crafted ‘worldtime' disc bearing the names of 24 cities each representing one of the different global time zones. Aligning the relevant city with the local hour on the outer chapter ring – or inner ring for cities with summer time - sets the dial-side globe in the correct position.

Completing the display-back is a gleaming sun, providing a visual reference for midday on the worldtime disc and radiantly lighting up the movement of this stunning timepiece.

The GMT is reinforced by the hallmarks of Greubel Forsey's renowned superlative fine finishing and attention to detail. The full range of traditional hand-finishing techniques have been employed including graining, bevelling,

Using a press release by GF