Angelus is a Swiss watch manufacturer.

The manufacture Stolz Frères SA was founded 1891 in Le Locle by the brothers Gustav and Albert Stolz. At the time when the company was founded the small office was on the first floor of a house in the Rue du Marais, later in the Rue de Jardin. The externally supplied watch parts were assembled in small workshops. Initially, the focus was on pendulettes and watch cases. The brand name used was Angelus.

From 1912, the company specialized more on complex watch movements with repetition and on chronographs, which were exported to Germany, Italy and Russia. 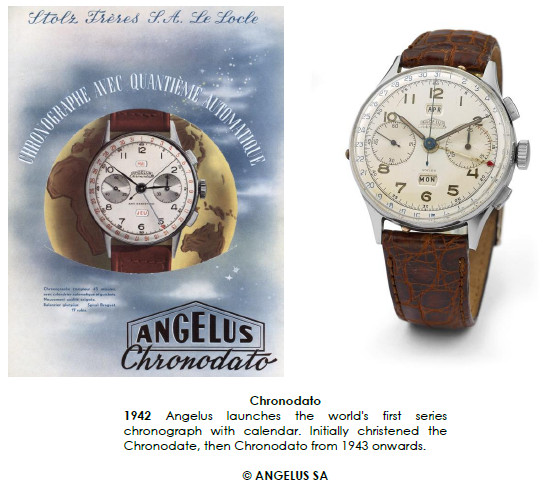 In the 30s and 40s of the 20th century, Angelus earned a reputation mainly because of its chronographs. These were equipped with self-produced manufacture movements. Well known became, among others, the 1942 presented model “Chronodate” (since 1943 “Chronodato”), the world's first serially produced chronograph with calendar function.

In 1948 the “Chrono Dato Luxe” was launched, available in two frame sizes - the first chronograph with calendar, day display and moon phase. Approximately 1960 as last chronograph the the “Medical”, a model for physicians, was brought on the market.

The quartz crisis then meant the end for the brand. Its models are still desired among collectors and connoisseurs.

After lying dormant for more than 30 years, Angelus in 2015 is revived by Manufacture La Joux-Perret (Citizen Holdings), which has spent four years developing the next generation of visionary timepieces. The Angelus' manufacture in La Chaux-de-Fonds is just a stone's throw from where the Stolz brothers established their original manufacture.

As premiere model the wristwatch Angelus U10 Tourbillon Lumière is presented. It is an elaborate luxury timepiece with tourbillon and further interesting characteristics, for example the oval case, the dead-beat second and the hight power reserve of 90 hours.