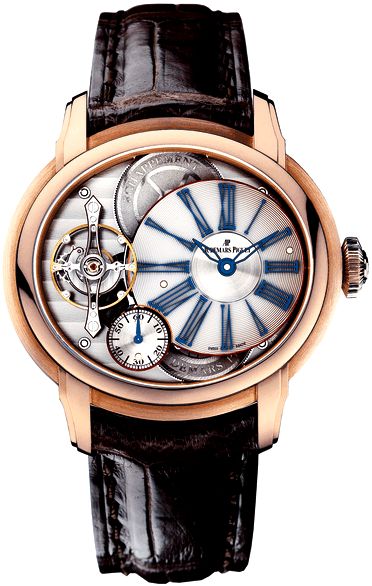 The series Millenary represents the classically elegant models by Audemars Piguet with the typical cross-oval or elliptical case form.

This new model has the AP escapement newly developed by Audemars Piguet Inspired by a mechanism that Robert Robin invented in the late 18th century, a completely new escapement system has been designed that connects the high power efficiency of an escapement with direct drive with the security of a Swiss lever escapement. By this power losses of the most “power hungry” component of the movement can be reduced without making use of new materials (silicone, etc.) or the need to lubricate lifting stones. This significant technical breakthrough was presented 2006 as a world premiere in the Cabinet N° 5 of the collection //Tradition d'Excellence//.

The eccentriccally at 7 o'clock arranged sub-dial offers one more technical exclusivity the „Seconde morte“ or Dead-beat seconds. This independent display which jumps in steps of seconds, without interfering with the rate of the watch, was invented in the 18th century. It is frequently found in the famous chronograph pocket watches by Audemars Piguet, generally combined with a “Seconde foudroyante” (a hand encircling the dial in one second).