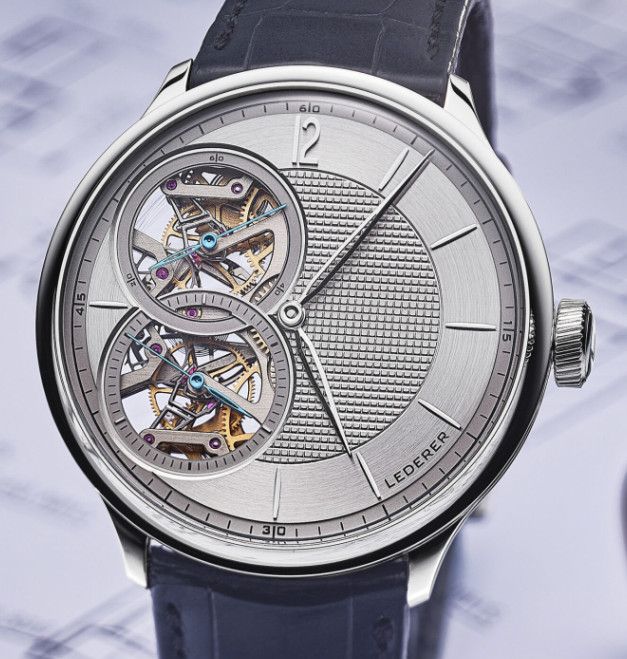 Bernhard Lederer is a Swiss watch brand named after the watchmaker and inventor of the same name.

Lederer is a native of Germany. In 1984 he began his apprenticeship in the workshop of the Wuppertal Watch Museum. At that time, he was already working on the restoration of old timepieces. He graduated from the Pforzheim Watchmaking School. His final project was a watch with a 1000-year perpetual calendar, which solved the problem of the 400-year non-switching time and provided an 800-year accurate moonphase and a display of solar and lunar eclipses. It also featured a gravity escapement.

1985, the year it was founded, he became one of the first members of the AHCI, the well-known association of independent watchmakers.

In 2000, Bernhard Lederer moved to Switzerland and founded his first watch brand, BLU.

2007, the BLU MT3 model caused a sensation: It was a tourbillon timepiece with three speeds (1 minute, 1 hour, 12 hours), no dial and no tourbillon cage for the minute tourbillon.

Introduced 2011, the Gagarin tourbillon is perhaps his most famous piece, one of the most original and complex tourbillons ever. The tourbillon cage, which rotates in one minute, floats above a 108-minute movement. The two are connected by a spectacular architectural column reminiscent of the Soviet era and visible through a magnifying glass.

Since 2015, Lederer has been working at the Manufacture de Haute Horlogerie et Micromécanique (M.H.M. for short), located in the village of St-Blaise near Neuchâtel.

Since 2016, he has been working on the “Masters of Escapements” series, a set of six new escapements. The first result is the Central Impulse Chronometer.

2021, the brand is awarded the Innovation Prize at the Grand Prix d'Horlogerie de Genève for this watch.