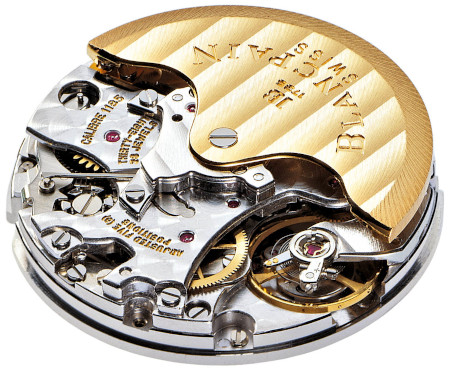 Calibre FP 1185 (and the similar Cal. 1186 and Cal. F185) is an ultra-thin automatic chronograph movement from Frederic Piguet, now known as Manufacture Blancpain.

Introduced by Frederic Piguet in 1988, Cal. 1185 is a modular movement but highly-integrated. It is based on F. Piguet's Cal. 1180, a hand-winding movement, and is very similar in construction, with just the automatic bridge and winding system added.

Cal. 1185 has an automatic winding system and column wheel construction with a vertical clutch. Cal. 1185 beats at 21,600 A/h. It measures 25.6 mm in diameter and 5.55 mm in height, has 37 jewels, and power reserve of 42 hours. This makes it the thinnest automatic chronograph made as of its introduction.

Cal. 1185 has been used by Blancpain (including a flyback model), Franck Muller, Vacheron Constantin, and Audemars Piguet in the Royal Oak chronograph.

The similar Calibre 1186 includes a rattrapante feature. This was the world's first automatic rattrapante chronograph and remains one of the thinnest at 6.9 mm. It is made up of 361 parts and has 38 jewels.

Omega wanted an automatic chronograph and turned to F. Piguet to develop it. The result was the ebauche Cal. 1285 and Cal. 1286, a much-modified version of Cal. 1185/1186. They share many similarities but also have key differences This movement runs at 28,800 A/h, is larger and thicker, and some include a Co-Axial escapement for Omega. The subdials are also modified All feature a 30 minute counter at 3 00, but the Omega ebauches have a 12 hour counter at 6 00, where the seconds are found on other movements in the family.