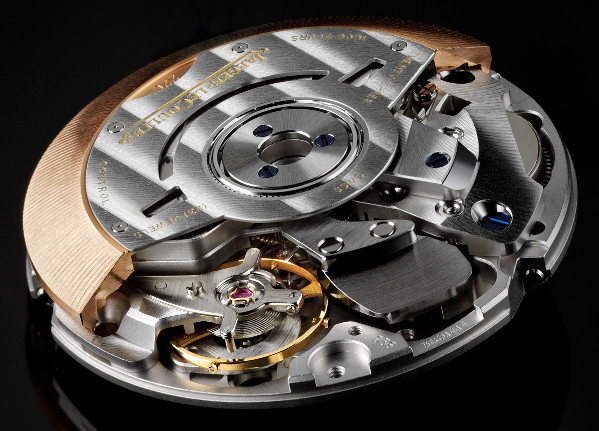 The JLC 956 is an alarm watch movement from Jaeger-LeCoultre.

The 956 is an automatic movement made up of 268 pieces. The repeater alarm function is descended from the original Jaeger-LeCoultre Memovox, dating back to 1950.

The most important difference between Calibre 956/912 and previous Memovox movements is the addition of a case-mounted brass gong. Rather than striking a protuberance on the steel case back, these calibres strike a circular gong mounted to the case back. This design was pioneered by Calibre 919 in 1989. Like other contemporary Jaeger-LeCoultre calibres, 956/912 uses ceramic bearings on it's rotor and has new gear profiles pioneered with "Autotractor" Calibre 975.

Calibre 956 was introduced in 2008 for the Jaeger-LeCoultre Memovox Polaris. It runs at 28800 vph, has 23 jewels, and a power reserve of 45 hours thanks to a large variable-inertia balance and ceramic ball bearings. One welcome difference between the Calibre 956 and earlier Calibre 918 and previous Jaeger-LeCoultre alarm calibres is the addition of a quickset date function.