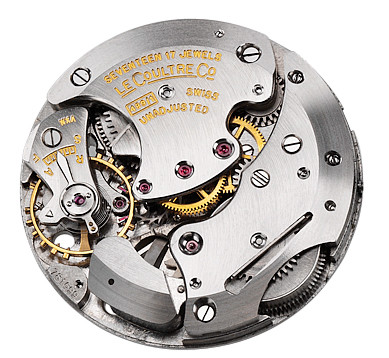 Calibre 489 was the first alarm movement from Jaeger-LeCoultre.

In 1949, Jaeger-LeCoultre began working on an alarm movement to rival the Vulcain Cricket. Their answer was introduced at Basel in 1951, the manual winding "Wrist Alarm" and later Memovox powered by Calibre 489. It featured two crowns, one at 4 00 for traditional time setting and winding and a second at 2 00 to wind and move a 12-hour disc which triggers the alarm function. Calibre 489 was replaced by Calibre 814 after 1958.

The alarm hammer struck a protuberance on the back plate, making a distinctive buzzing sound. Even if the alarm was not wound, the hammer rattled freely against the protuberance.

Introduced in 1952, Calibre 601 is an extremely rare variant of Calibre 489. Serving as a transitional model, it has a single bridge covering the barrel and wheels. It is 1 mm wider than both the predecessor Caliber 489 and successor, Caliber 814. Fewer than 2,000 Calibre 601 movements and watches were produced.

The name, Calibre 601, was also used in 1982 on the world's thinnest quartz movement from Jaeger-LeCoultre.