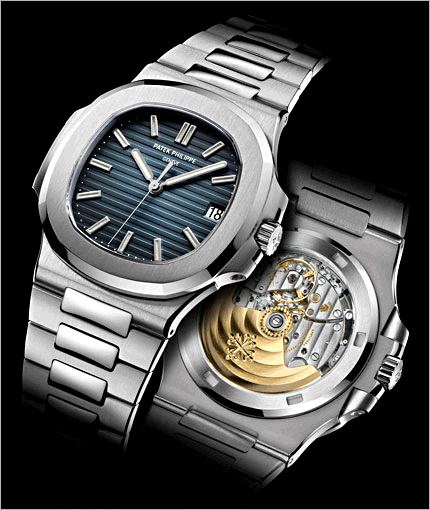 This is the basic Nautilus model from the second generation of the Nautilus family.

This legendary sports watch by Patek Philippe, designed by the famous watches designer Gérald Genta, in 1976 excited by its combination of luxury and stainless steel. Its design is inspired by the shape of ship portholes. The case is quite large but the thin case and integrated bracelet makes it wear smaller. Although known mainly as a steel watch, the Nautilus was also available in steel and gold, 18K yellow and white gold, as well as platinum.

Patek measures the case at 40 mm (from 10 00 to 4 00) but others refer to it as 43 mm (as measured across the dial, from 9 00 to 3 00). Unlike the original Nautilus, with its straight hinge, the new Nautilus family is convex at the hinge and crown, matching the bezel. The new Nautilus case is also composed of three main components rather than two The solid, monobloc back is gone, with a sapphire crystal allowing the movement to be viewed, as on the short-lived 3711 and 3712. The side-mounted bezel screws remain, though they now form a “sandwich” with the case back rather than attaching to it directly.

The entire Nautilus family was replaced by Patek Philippe, with four new models introduced at a Geneva party held in November of 2006 to celebrate the 30th anniversary of the model. Launched that day were the simple 5711/1A, the mid-sized 5800, the 5712 Moon Phase, and the first-ever Nautilus chronograph, Ref. 5980. New to the collection are pink gold models and the introduction of optional leather straps rather than the traditional integrated bracelet.

This Ref. 5711 took over for both the original Ref. 3700 and the larger 3711. The Nautilus remains available in steel, with steel-and-gold and all-gold models also available. An extremely-rare platinum version has also been made in limited numbers. The Nautilus 5711 was launched with Patek Philippe's in-house full-rotor automatic Calibre 315 SC but this was quickly replaced that same year with the new Cal. 324 SC. This new calibre oscillates at 28,800 A/h rather than the 21,600 A/h of the 315 SC and incorporates many other changes besides.

In 2019, Patek Philippe replaced the Cal. 324 with the new Cal. 26-330. This new movement features an innovative new wheel arrangement to reduce “flutter” of the central seconds hand.