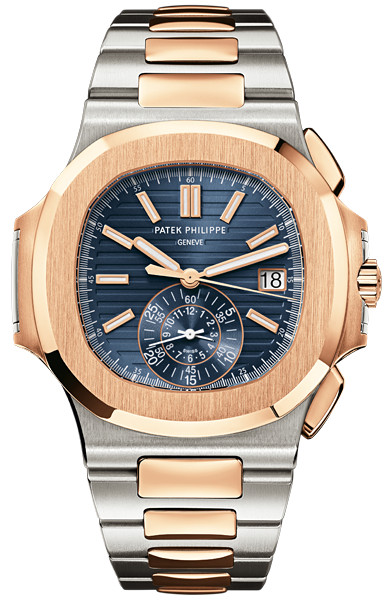 The Nautilus Ref. 5980 is a sports chronograph watch by Patek Philippe, introduced in 2006 as the first Nautilus chronograph.

Although the Nautilus line had become legendary since its launch in 1976, there had never been a chronograph model. This was rectified in 2006 with the launch of Ref. 5980, and this watch has been incredibly popular ever since. As with the rest of the Nautilus line, it draws inspiration from the design by the famous watches designer Gérald Genta. The case is quite large but the thin case and integrated bracelet makes it wear smaller. Although known mainly as a steel watch, the Nautilus was also available in steel and gold, 18K yellow and white gold, as well as platinum.

Patek measures the case at 40.5 mm (from 10 00 to 4 00) but others refer to it as 44 mm (as measured across the dial, from 9 00 to 3 00). Unlike the original Nautilus, with its straight hinge, the new Nautilus family is convex at the hinge and crown, matching the bezel. The chronograph model adds two buttons above and below the crown, changing the Nautilus silhouette for the first time. This new case is also composed of three main components rather than two The solid, monobloc back is gone, with a sapphire crystal allowing the movement to be viewed, as on the short-lived 3711 and 3712. The side-mounted bezel screws remain, though they now form a “sandwich” with the case back rather than attaching to it directly.

The entire Nautilus family was replaced by Patek Philippe, with four new models introduced at a Geneva party held in November of 2006 to celebrate the 30th anniversary of the model. Launched that day were the simple 5711/1A, the mid-sized 5800, the 5712 Moon Phase, and the first-ever Nautilus chronograph, Ref. 5960. New to the collection are pink gold models and the introduction of optional leather straps rather than the traditional integrated bracelet.

One challenge for the designers of the Nautilus 5980 was how to keep the dial as clean as possible. They accomplished this by putting the minute and hour chronograph registers together co-axially in a single subdial at 6 00. Combined with the flush, contoured buttons, this creates a very subtle effect. To the casual observer, the Ref. 5980 might appear to have a second or calendar subdial or perhaps a second time zone rather than a chronograph. The movement used, Calibre CH 28-520, was launched the previous year in the Complications Ref. 5960.

The Ref. 5980 has proven incredibly popular with collectors and enthusiasts and has a very long waiting list.