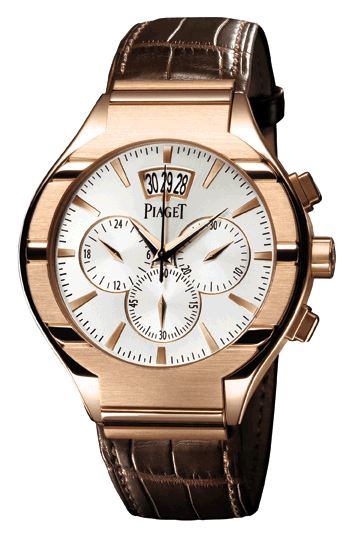 The model Polo by Piaget was regarded as a cult watch in the 1970s. In autumn 2006 it was re-launched in an updated form as automatic watch. The distinctive horizontal stripes accent the fine satin-finished case. The dial gains attention with its applied stitch indices and Arabic numerals, also the enlarged section of the date display is noticed. The movement can be admired through the sapphire crystal caseback.

The Polo Chronograph was presented in 2007. It houses the new Calibre 880P, the first fully developed and manufactured automatic chronograph movement of the manufacture. In addition to the flyback function this calibre stands out for its second timezone in 24 hours format. The column wheel chronograph surrounds a waterproof case of stately 43 mm diameter.