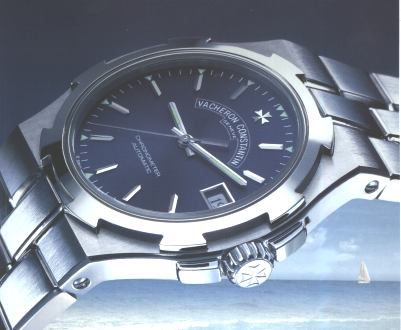 Overseas is a line of sports watches produced by Vacheron Constantin since 1996.

In 1972, Audemars Piguet shook the watch world by introducing the Royal Oak, a premium-priced steel sports watch with an integrated bracelet and “porthole” styling. Designed by Gerald Genta, the Royal Oak provided a template for other Swiss luxury watch makers to follow. He went on to design similar watches for Patek Philippe (the Nautilus) and IWC (the "Jumbo" Ingenieur SL).

Vacheron Constantin followed the same basic template for their “project 222”, introduced in 1977. Young designer Jörg Hysek created a very similar design, complete with screws from the caseback to the bezel “sandwiching” the case for water and shock resistance and an integrated bracelet of flat links. The Vacheron model aped the Royal Oak with an extremely flat case thanks to the ultra-thin Jaeger-LeCoultre-derived Cal. 1120, the same basic movement also used by Audemars Piguet and Patek Philippe. The Ref. 222 featured a scalloped bezel, a plain dial with baton markers, and the distinctive Maltese Cross at lower right on the case. It was available in 37 mm, 34 mm, and 25 mm (quartz) versions (as well as a square-case variant) through the mid-1980s.

An octagonal Ref. 333 model followed in the 1980s, along with the Phidias from the 1990s, before Vacheron Constantin returned to the style of the 222 with the 1996 Overseas. All Overseas watches feature a trademark Maltese Cross bezel, with eight points like the Royal Oak but no exposed screw heads, though the bracelet is a three-part link design quite different from the 222 or competing models. The original Ref. 42050 measured 37 mm and was powered by Cal. 1310, while later versions measured 35 mm (Ref. 79050) and 24 mm (Ref. 16050). An Overseas Chronograph (Ref. 49140) was launched in 1999 featuring the F. Piguet Cal. 1185 with a big date added.

Phase 2 of the Overseas line appeared in 2004. The new versions were streamlined with a new bracelet and larger 42 mm case as well as the updated Cal. 1126 (based on the JLC 889) with an anti-magnetic soft iron case like the IWC Ingenieur and Rolex Milgauss. The Overseas Chronograph was updated as well, though the Cal. 1137 movement remained similar to the previous model. The Overseas Dual Time was added in 2006 with Cal. 1222, nearly the same movement used by Audemars Piguet in the Royal Oak Ref. 26120. The chronograph was available with a leather or rubber strap for the first time in 2007 with a limited edition for the USA. A perpetual calendar model was introduced as well.

In 2016, Vacheron Constantin introduced Phase 3 of the Overseas line with a completely redesigned case. The most obvious change was the bezel, which now features six Maltese Cross elements over an integrated disc, as well as the addition of a sapphire display caseback. The bracelet appears similar to Phase 2 but now features a novel system to allow straps to be interchanged without the use of tools. The new Cal. 5100 and Cal. 5200 move the model to an in-house movement for the first time. A World Time model is new, and an Ultra-Thin model recalls the original and even uses Cal. 1120. The Chronograph gets an in[house movement as well, Cal. 5200, but loses the big date feature of the old F. Piguet movement.

The first-ever tourbillon in the Overseas line was introduced at SIHH in 2019, the aptly-named Overseas Tourbillon, Ref. 6000.

The original Overseas, introduced in 1996

Updated models beginning in 2016, many with in-house movements and a quick-change strap system