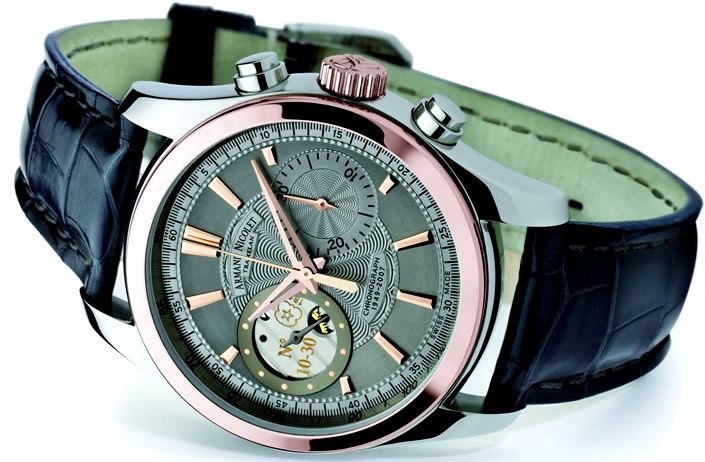 Armand Nicolet is a Swiss watch manufacturer named for a putative 19th century watchmaker of the same name.

Today's Armand Nicolet brand claims that the watchmaker Armand Nicolet founded his workshop in Tramelan in 1875 and handed the business to his son Willy Nicolet after his death in 1939. But there is no evidence of a watchmaker named Armand Nicolet active at that early date, with the likely namesake of the company first listed in Indicateur Davoine over 50 years later.

The most likely ancestor is Alcide Nicolet, who produced cylinder escapements in Tramelan-Dessus from 1886 through 1893. He is listed as a producer of Remonteurs in 1894 and of complete watches in 1895. Alcide is the only member of the Nicolet family listed as producing watches in Tramelan (Dessus or Dessous) between 1886 (when cylinder escapement maker Samuel Nicolet is last seen) and 1916, when Achille Nicolet first appears.

Alcide Nicolet was born in 1853 and married Adele Vuilleumier in 1875. The couple had 13 children, 10 of whom survived to adulthood. Among them are Achille Nicolet, born 1877, Paul Armand Nicolet, born in 1884 and likely the namesake of the modern company, Charles Albert Nicolet, born 1890. This large family is the reason the Nicolet name is so closely associated with Tramelan, and the source of so many watchmakers of that name after the turn of the century.

The Verneta brand was previously used by the Verneta Watch Co. of Porrentruy. Operated by Girardin & Wetterwald, Verneta produced anchor and cylinder watches by 1908 in steel, gold, or silver. It used the Verneta and Blanda brands. In 1916, Ariste Girardin is listed as the maker of Verneta Watch Co. watches, still in Porrentruy, and now also using the Neologa brand. This company disappears after this.

Armand Nicolet of Tramelan begins using the Verneta brand in 1933 and continues through 1969. They also use the Telda brand for all of these years. In 1938, Nicolet begins using the Delta brand as well and adds ADO Watch from 1940 through 1951. ADO is listed as a trademark of Fernand Nicolet from 1956 through 1966, a separate firm perhaps run by Armand's son.

The company is renamed Les Fils d'Armand Nicolet in 1940. The firm also begins using the name Montres Telda that year. According to the company's history, Armand Nicolet died in 1939 and his son Willy Nicolet took over the business that year. This corresponds with the name change.

At the beginning of the 1990s, Rolando Braga, an entrepreneur from Italy, cooperated with Willy Nicolet. From this meeting of Italian design and Swiss know-how a successful collaboration emerged. Willy Nicolet died 1992, and Rolando Braga took over the management. He carried out a reorganization of existing businesses. The production was maintained at Armand Nicolet Tramelan (Nicolet SA) and the Marketing & Design (Nicolet MD) was settled in Brescia, Italy. Both companies are added together in 1993 to a holding NH SA.