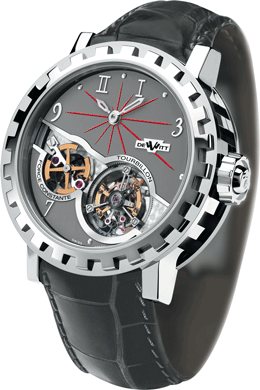 Academia Tourbillon Force Constante is a wristwatch by DeWitt.

In the spring of 2006 Jérôme de Witt presented at the Baselworld this extraordinary luxury watch with tourbillon. It is equipped with the patented manual winding manufacture movement DW 8003, which was newly developed in collaboration with BNB.

The term “force constante” refers to a novel escapement system in which the driving force of the mainspring is held continuously equal during the entire running time. This is not the case with the usual watch concept, because the mainspring - especially for watches with manual winding -, when fully wound, is tightly stretched and then provides a much higher energy than at the end of the running time. In contrast, the escapement concept which is introduced here gets the energy of the barrel only once per second and sends it to the tourbillon every 10 seconds.

This process of dosed force transmission can be followed through a dial aperture where a cross-shaped inertial element with four hammers performs six revolutions per minute.