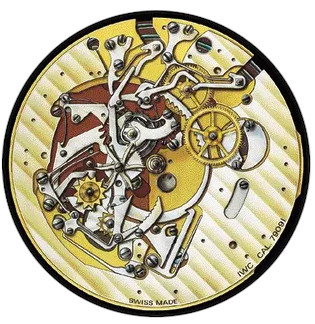 The 79091 is a grande complication movement produced by IWC based on the Valjoux 7750 ebauche since 1990.

The Valjoux 7750 movement was extremely important to the resurgence of IWC and the basic design remains in use today. The company has used it for many important innovations since the 1980's, including a perpetual calendar, rattrapante, and grande complication. The 7750 ebauche was used for the 790 family of movements and the basic architecture is the basis for today's 69000 family of movements.

Cal. 79091 began with a Valjoux 7750 ebauche before being disassembled and modified by IWC. The movement was refinished and plated with gold, then assembled and regulated by the company. The Klaus perpetual calendar and minute repeater mechanisms are added to the existing automatic chronograph. Unlike earlier complicated movements which beat slower, this Cal. 79091 runs at 28,800 A/h.

In 1992, IWC introduced “Il Destriero Scafusia”, another grande complication, which added a tourbillon and rattrapante function in Cal. 18680.