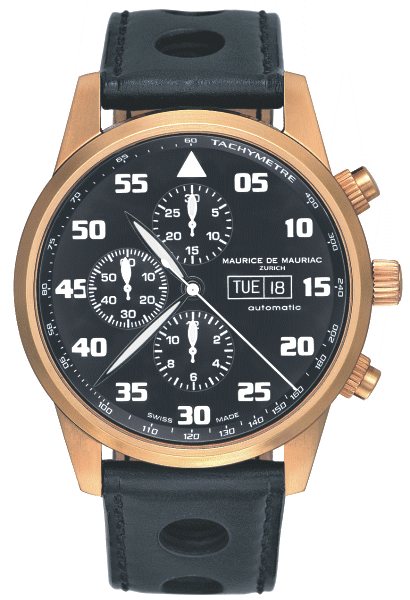 The former investment banker Daniel Dreifuss, born on January 1 1960 in Kreuzlingen, in 1997 presented under the name Maurice de Mauriac his first watch, an automatic chronograph with mechanical movement. Since then, the collection has been expanded to include several other models, almost all of which are powered by automatic ETA movements.

The watches are produced and sold in the company's own workshop in the middle of Zurich's financial district, 400 meters from Paradeplatz. Daniel Dreifuss employs 4 watchmakers. The company is a member of the Fédération de l'industrie Horlogère Suisse (FH) and presents its collections at Baselworld.

A recurring basic motif with this manufacturer is the idea of the interchangeable bezel, which Dreifuss has also patented. This allows the watch to be flexibly adapted to the individual taste of its wearer. The bezels are made of steel, black hardened PVD or red gold. For the ladies, bezels set with rubys or diamonds are also offered.

A choice of up to 35 different dials per model is also possible. As with the bezels, the dials can also be replaced at a later date. In addition, all cases are CNC forged and 100 m water resistant.

The main collections are