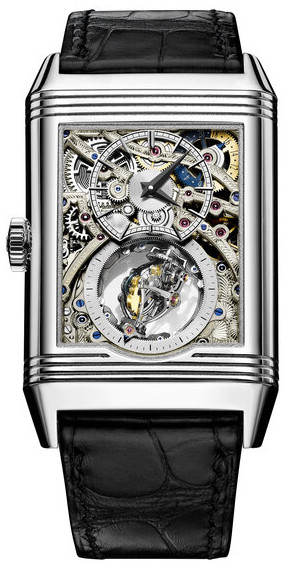 The Reverso Tribute Gyrotourbillon (Ref. 3946420) is a tourbillon Reverso watch from Jaeger-LeCoultre, introduced in 2016 as part of the Hybris Mechanica series.

The face of the watch shows the time (hour and minutes) with a large aperture below for the 60-second tourbillon to show the seconds. A day/night indicator disc is placed behind the dial between 9 and 11 and a balance wheel is placed opposite between 1 and 3. The reverse side of the watch is also transparent and more skeletonized, with time display in the center and second time zone shown on a disc behind the dial between 1 and 3.

The new Cal. 179 is greatly simplified from previous Gyrotourbillon watches from Jaeger-LeCoultre, with just 385 components despite the complication of a second time zone and day/night indicator display. The outer tourbillon cage rotates every 60 seconds, but the inner case turns every 12.6 seconds. The most arresting feature of this new tourbillon is the hemispherical hairspring, a remarkable innovation both technically and visually.

The Reverso Tribute Gyrotourbillon case measures 31 mm by 51.1 mm and is 12.4 mm thick.