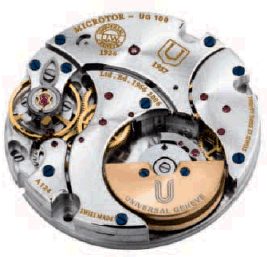 Compact weight segment of an automatic watch, which can be well integrated into the movement because of its smaller diameter. So the full case height can be exploited. The other competing principle is called the central rotor.

One challenge for micro-rotor movements is the limited amount of power they can generate. The typical solution is to use a more complex bi-directional winding system along with a heavier rotor. Even so, micro-rotor movements are notorious for not fully winding the mainspring without quite a lot of motion.

Today, many brands produce micro-rotor automatic movements, though it is not a dominant design. Vaucher Manufacture Fleurier are the largest producers, supplying Parmigiani Fleurier, Chopard, and others. Patek Philippe and Piaget also have popular micro-rotor movements.

The micro-rotor movement first appeared in 1958 with simultaneous announcements of unrelated projects at Büren and Universal Geneve. Over time, both companies claimed earlier dates, with Büren claiming a 1957 introduction in a 1965 advertisement and Universal dating theirs to 1953 just a few years later. Contemporary coverage clearly dates the introduction of both movements to 1958, however.

At Büren, Chief Design Engineer Hans Kocher championed the concept. He opted for the term, Planetary, to describe his micro-rotor movement, since the small rotor reminded him of a planetary gear. The Büren calibre was released as the “Super Slender”, even though it was about the same height as competing movements at 4.15 mm. In 1960, Büren added a quick date change and corrector to this movement.

At the same time, Universal Geneve was developing a similar technology and trademarked the term Microtor to describe it. Universal's movement was unable to beat Büren with their 4.2 mm Cal. 1-69.

Piaget was another early micro-rotor pioneer, beating both with their 2.3 mm thick Cal. 12P in 1959. It used a solid gold weight segment to improve winding efficiency and had 30 functional jewels. This was celebrated at the 1960 Basel Fair as the thinnest automatic movement in the thinnest automatic watch, Ref. 12444, in the world.

The second generation of micro-rotor movements began in 1962 with but Büren Intramatic line. It was just 3.15 mm thick, and the race was on as In 1964, Büren launched an even thinner Intramatic movement, Cal. 1321, measuring 2.85 mm thick without center seconds, along with thicker central seconds and calendar options. Universal Geneve launched their 2-handed Golden Shadow at the 1966 Basel Fair with the new Cal. 2-66 which measured just 2.5 mm thick.

Another shining moment for the micro-rotor came in 1969 when one of three groups in the race for the world's first automatic chronograph leveraged the technology. The Chronomatic used a Büren Cal. 1281 ebauche to achieve a reasonable size to go to market.

Patek Philippe launched their own micro-rotor movement, Cal. 240, in 1977. In the decades since, this has become their leading high-end movement and powers many of their most desirable watch models. Piaget remains committed to the design as well, using it in many of their ultra-thin movements, including their Cal. 12P, the thinnest automatic movement ever at 2.3 mm, and the Piaget Altiplano 900P. Chopard is another champion, working with Michael Parmigiani and Philippe Dufour to develop a double barrel thin calibre of their own, L.U.C 96.