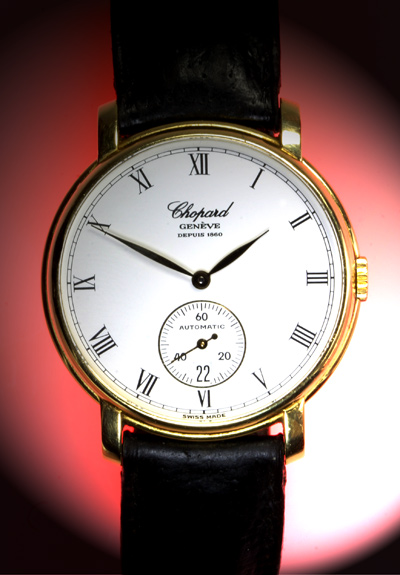 Chopard is a Swiss watch and jewelry manufacturer established in 1860.

Louis Ulysse Chopard founded Chopard in 1860 in Sonvilier in the Swiss Jura. It was originally focused on ultra-thin pocket watches as well as high precision timekeeping devices supplied to the Swiss Railway. After the death of his father, Paul-Louis Chopard continued the company, opening a subsidiary in La Chaux-de-Fonds which would become the company's headquarters in 1923. In 1927 the company moved to Geneva under the direction of Paul-André Chopard, the third-generation director of the firm.

In 1963 Chopard was sold to Karl Scheufele, manager of the successful jewelry operation from Pforzheim. The Scheufele family had manufactured jewelry and watches of their own in Germany since 1904, later using the Eszeha brand name.

In 1976, Chopard introduced the Happy Diamonds line, which features movable diamonds behind a crystal. This would become their signature, both for watches and for jewelry. The Happy Sport was the first watch to combine stainless steel cases and diamonds and was launched in 1993. Another important Chopard line is the Mille Miglia, established in 1988 and celebrating the famous motor rally.

In 1996 Chopard established a separate watch manufacture in Fleurier, where watches are designed and manufactured with in-house L.U.C. movements. This was the fulfillment of a long-standing goal of the Scheufele family and was achieved with the support of watchmaker Michel Parmigiani and his company, who were strong proponents of watchmaking in Fleurier. In 2008, Chopard launched Fleurier Ebauches, a mainstream watch movement manufacturer nearby.

This family business, with branches in Geneva, Fleurier, and Pforzheim, became one of the most successful jewelry and watch manufacturers in the world.

In 2000 the L.U.C Quattro with the calibre L.U.C 1.98 has a premiere. It is equipped with four barrels (2 x 2, lying on top of each other) and garantees a power reserve of approximately 9 days.

In 2001 the calibre L.U.C 3.97 tonneau is presented, an automatic form movement with eccentric micro-rotor.

In 2007 Chopard launches with the L.U.C. 10 CF its first automatic chronograph movement, for which three patents are pending.

In 2019, Chopard launched the L.U.C 96.24-L, the company's first flying tourbillon and one of the thinnest automatic tourbillon movements. It features two barrels stacked and a micro-rotor.