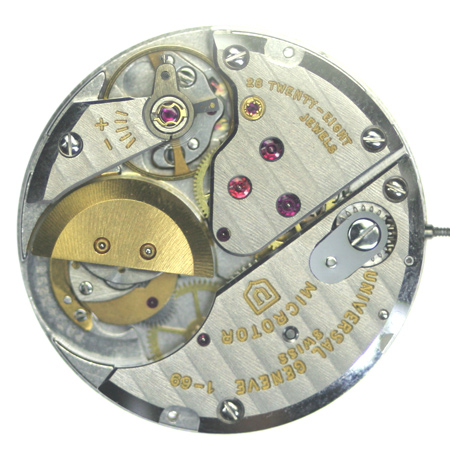 Numa-Emile Descombes and Ulysse Georges Perret founded an etablissage workshop and watch dealership in 1894 in Le Locle. Early on, the company specialized in wristwatches, developing a chronograph with a 30-minute counter in 1897. In 1917, during the first World War, Universal produced one of the first bracelet chronograph watches. By 1918, Universal had already openend a branch in Geneva, which was gradually expanded to become the administrative center of the company. It was officially renamed Universal Genève in 1937.

In the 1930s, the focus was on the production of wrist chronograph models with the models Colonial, Compur and the very successful Compax chronograph range. In 1941, Universal built a new factory in Pont-de-Martel to meet the demand for watches as war equipment. It is unclear whether the chronograph movements came from Martel or Universal's factory there, but Universal also developed and produced their own time-only movements.

In the fifties, Universal patented, among others, a jumping central seconds, an automatic with bidirectional rotating central rotor and the “Microtor”, an automatic with off-center planetary rotor (also called micro-rotor). In 1954 the company launched the Polarouter, predecessor of the well-known wristwatch model “Polerouter”. In 1956 a new production facility in Geneva was established and thus the entire production was shifted there.

In 1966, Montres Universal Perret and Berthoud SA, as it was then known, joined together with Bulova. The companies remained somewhat separate from a product development and sales perspective, but this did give Universal access to Bulova's tuning fork movement technology, resulting in the 1968 introduction of the Universal Unisonic line. Universal would go on to use Bulova's tuning fork emblem on the dial of their watches, leading to some branding confusion between the two.