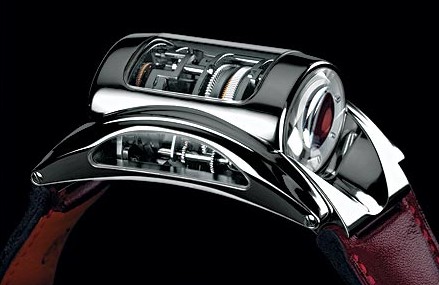 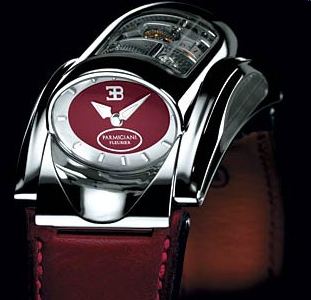 dial side of the Bugatti Type 370

Famed car manufacturer Bugatti partnered with Parmigiani to produce a line of high-end watches starting in 2001 and lasting until 2019.

The initial Parmigiani Bugatti Type 370 was announced in 2003 along with the Volkswagen-owned Bugatti brand, and released for sale the following year. This barrel-shaped watch was an extreme example of Haute Horlogerie with 5 plates arranged transversely to the wrist and an external device used for winding. The Type 370 was available in limited numbers at prices exceeding CHF250,000 starting in 2005.

In 2010, the range was expanded with the introduction of the Bugatti Atalante model, a round watch using the new flyback chronograph Cal. PF335. This extended the Bugatti brand out of the company's “High Complication” range and was priced accordingly around CHF40,000. The watch featured a slatted dial said to resemble the grille of a classic Bugatti automobile along with asymmetric chronograph registers at 3 and 9, an off-center rising date window below, and pushers on the left side of the dial.

The company also previewed the Bugatti Super Sport that year. An exotic and exclusive timepiece like the Type 370, the Super Sport saw its official unveiling at SIHH 2011. The new Cal. PF372 is entirely unlike any other movement, arranged in two planes at right angles with the escapement angled up and the dial 30 degrees from vertical. Although pricing was private, reports suggest that it started over CHF500,000. A similar watch, the Vitesse, was released in 2012.

The Bugatti line was refreshed in 2014 as Parmigiani launched the more-affordable Aerolithe. A re-worked Atalante, the Aerolithe used the same Cal. PF335 but had a more-conventional solid dial, symmetrical chronograph registers, and date centered at 6 00. It was also more affordable, priced at CHF27,800.

A true successor to the Type 370 was introduced in 2016, the Bugatti Type 390. Like the Cal. PF370, this new Cal. PF390 is arranged in layers. But this time the movement is placed longitudinal to the wrist, with an angled dial perpendicular. The Type 390 was priced over CHF300,000, below the Super Sport but above the Type 370 and other models.

In March 2019 Bugatti announced that their partnership with Parmigiani was ending.