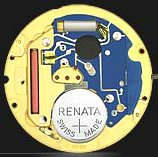 In a quartz movement a crystal is made to vibrate in electrical oscillations. The frequency is then divided down to one cycle per second, detected visually by jerkily moving the seconds hand. The second step is transfered with a tiny motor to the gear train.

Today, quartz movements are to be found mainly in watches of the lower price ranges and in most women's watches.