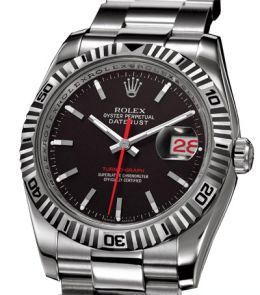 The Turn-O-Graph is a watch with a rotating bezel from Rolex.

After World War II, Rolex began developing tool watches for various professions. In 1953, the company released the Turn-O-Graph, the first production watch with a rotating bezel. The bezel on the Turn-O-Graph, marked in 60 increments with numerals every 10 marks, was designed to be lined up with the minutes hand. In this way, one could count elapsed minutes. Rolex had released a prototype watch with a rotating bezel in 1937, the Ref. 3346 Zerographe, but a dozen or less were produced.

The Turn-O-Graph is best remembered for the watches based on its design The famous Submariner and GMT-Master both shared the case and rotating bezel of the Turn-O-Graph. But this watch continued production as well, lasting on and off until 2011 in the company's collection.

The first Turn-O-Graph Ref. 6202 was launched in 1953 with Cal. A.260. Its styling was a major departure for the company, punctuated by the thick black rotating bezel. Some versions featured the “Submariner” dial Black with a gilt chapter ring, simple dot markers interrupted with bars at 3, 6, and 9, and a triangle at 12. Some had stick hands while others featured the familiar Mercedes style. Other versions were two-tone (gold and steel), had a honeycomb dial with bar markers, or had numerals like the Explorer. Period advertisements showed it as a useful tool around the home and in sports.

With the launch of the Submariner in 1954, Rolex refocused the Turn-O-Graph to be more of a dress watch. The new Ref. 6309 and 6609 added a date window at 3 00, complete with “cyclops” magnifier, bringing it under the Datejust family banner. It had a solid metal bezel with markers at 5 and 10 minutes and upgraded the movement to Cal. 743 or Cal. 1065. Rolex also supplied these watches to the US Air Force Thunderbirds squadron, a rare dial variation.

The next upgrade to the Turn-O-Graph came in 1959 and continued the focus on dress and home use. Ref. 1625 was produced in many different case and dial variations, including yellow and white gold and steel, and was produced until 1977. Many of these models, and those that followed, no longer had the words, “Turn-O-Graph” on the dial, simply reading “Superlative Chronometer Officially Certified”. The Turn-O-Graph name was retired from advertising as well after Ref. 1625 in 1977 and did not return until 2000.

Rolex switched to Cal. 3035 and issued Ref. 16253 in 1977. Most of these were two-tone steel and yellow gold as was the fashion at the time. The Turn-O-Graph name was not used in this period.

The updated References 16263 and 16264 followed after 1988 with Cal. 3135. This generation featured a sapphire crystal and was only offered with a steel or two-tone case.

In 2004, Rolex revived the Turn-O-Graph name on the dial, launching a new family to commemorate 50 years since the original release. The new model featured a fluted bezel that resembles the standard fixed bezels on the rest of the line but with stick markers every 5 minutes and numbers every 10. These new References, 116263 and 116264, lasted in production until 2011.

Rolex models, Rolex Turn-O-Graph models
We use cookies and other tracking technologies to improve your browsing experience on this website and for data collection for personalized ads.More information
rolex_turn-o-graph.txt · Last modified: 11.10.2021 17:34 (external edit)