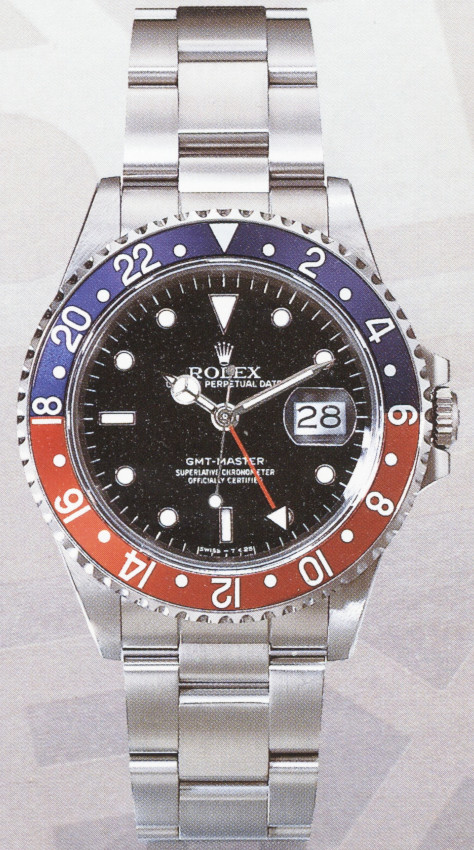 After World War II, Rolex began developing tool watches for various professions. In 1954, the company released the Submariner and GMT-Master, both of which featured rotating bezels. The GMT-Master was the result of a joint venture between with Pan American World Airways, which had requested a watch to help pilots keep track of both local and GMT time. They supposed that a pilot could sleep on their regular schedule and avoid jet lag regardless of where they were.

The GMT-Master is based on the Rolex Datejust Turn-O-Graph, launched a year earlier, which had a rotating bezel for timing. The bezel on the Turn-O-Graph, marked in 60 increments with numerals every 10 marks, was designed to be lined up with the minutes hand. In this way, one could count elapsed minutes.

The 1955 GMT-Master Ref. 6542 was quite different. Rolex added an additional central hour hand to the movement, geared 1/2 the normal one, so it rotated once every 24 hours. The Plexiglas bezel was marked with 12 increments, alternating dots and numerals. It could then be rotated forward or back and read with the 24 hour hand to show GMT time on the bezel, while the smaller 12-hour hand would show local time using the dial. This system was quite easy to read, though not quite as user-friendly as modern GMT watches with an independent hour hand. The Ref. 6542 strongly resembled the contemporary Submariner Ref. 6200, with no numerals on the dial. This first GMT-Master used Cal. 1036, Cal. 1065, or Cal. 1066.

Rolex updated the GMT-Master and Submariner in 1959 with crown guards and an aluminum anodized bezel. The GMT-Master Ref. 1675 is regarded today as the quintessential example of the model, though it also did not have a true independent hour hand. This updated GMT-Master used the 18,000 A/h Cal. 1565 until 1965 when it was updated with the 19,600 A/h Cal. 1575. This lasted in production until 1980, when it was updated to become the Ref. 16750. Cal. 3075 in the GMT-Master Ref. 16750 was the first GMT-Master to offer a quickset date function, and it also operated at 28,800 A/h. It is considered a transitional model today, being only produced until 1988.

In 1983, Rolex introduced the GMT-Master II, Ref. 16760, which was the first to offer an hour hand that could be set independently. The case is extra-thick to accommodate this larger Cal. 3085 movement, giving rise to the nickname “Fat Lady” today. Like the contemporary Ref. 16750, this model was only produced until 1988. 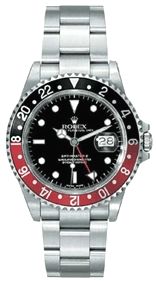 One aspect of the GMT-Master and GMT-Master II is the use of two-tone bezels. This was part of the original spec for the model, and the longevity of certain color combinations has added to the affection of Rolex collectors. In all cases, the color changes at 6 00 and 18 00 on the bezel, indicating day and night.

The classic GMT-Master color combination is “Pepsi”, so-called for the red and blue bezel. This iconic Rolex timepiece has been in the lineup since the very beginning, debuting in 1955 as the original GMT-Master, Ref. 6542. This first model featured a luminous bakelite bezel which was prone to cracking, so Rolex replaced it with a metal insert in 1956. The Ref. 1675 followed in 1959 and was produced until 1980. The next model switched to a new movement and Jubilee bracelet Ref. 16750 was produced from 1981 through 1988.

The original “Root Beer” GMT-Master featured a two-tone brown and cream bezel. This Ref. 16753 also featured a brown dial and two-tone steel and yellow gold case. It is also sometimes called the “Nipple Dial” due to the use of gold pips as markers. These pips resemble a precious stone, giving the watch another name “Tiger Eye” or “Tiger Augen”. Yet another name for this reference is “Clint Eastwood”, after the American actor of the same name who favored it. These were produced through the 1980s.