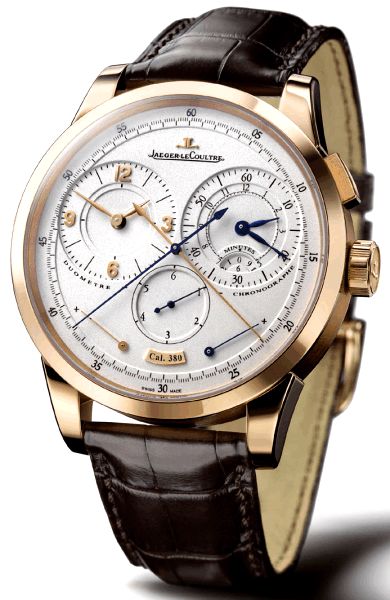 Jaeger-LeCoultre Duomètre à Chronographe with a 1/6 second foudroyante hand at 6:00

Seconde foudroyante is a hand which completes one full revolution per second.

A semi-foudroyante hand is one which rotates at a period of less than a minute but more than a second. For example, the Zenith El Primero Striking 10th features a central chronograph hand which rotates six times per minute. This allows it to record tenths of a second on a legible scale.

The meter around the foudroyante hand is usually divided into a number of jumps (sections) and thus enables partial seconds to be observed. Depending on the movement, a foundroyante can include 4, 5, 6, 8, 10, or more jumps, allowing measurement of 1/4, 1/5, 1/6, 1/8, or 1/10 seconds. Seconde foudroyante is usually placed in a subdial, but some watches use the main central dial for this function. For example, the Zenith El Primero Striking 10th has a central 6-second foudroyante marked in 1/10 second intervals while the Jaeger-LeCoultre Duomètre à Quantième Lunaire and Duomètre à Chronographe have a foudroyante subdial at 6 00 marked in 1/6 second intervals.

A typical seconde foudroyante mechanism releases each time the balance passes its central position, limiting the precision of the mechanism to the speed of the works. For example, a 14,400 vph movement only makes 4 complete oscillations per second, so it can only measure quarter-seconds. Faster movements can have more precision 21,600 vph can measure 1/6 seconds while 28,800 vph could measure 1/8 seconds. Two famous fast chronograph movements, the Zenith El Primero and TAG Heuer Calibre 360, could measure 1/10 and 1/100 seconds, respectively.

Most seconde foudroyante movements draw power from the main barrel, but this complication can rapidly drain the mainspring or cause issues with timing accuracy. For this reason, many manufacturers have turned to double barrel movements or other novel approaches. The F. P. Journe Centigraphe Souverain uses the barrel arbor to power the chronograph and foudroyante, essentially dual-purposing a single mainspring. In contrast, double barrel movements such as the Jaeger-LeCoultre Duomètre à Chronographe have a separate power source.

Seconde foudroyante dates from at least the 1870's and was developed for precise timing of sporting events, especially horse racing. “Foudre” is French for “lightning”, and this is the preferred name in English, along with “jumping seconds”. In German, this complication is known as “Blitzende Sekunde” (flashing second), while Italians call it “diavoletto”, meaning “little devil”.