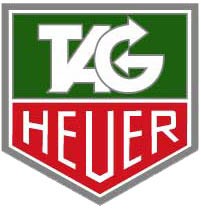 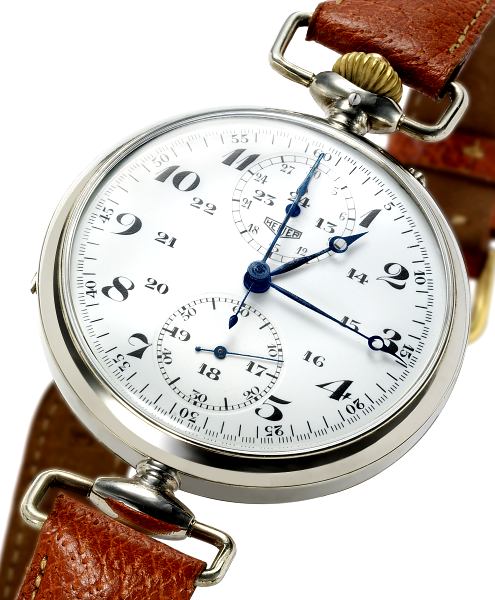 TAG Heuer is a Swiss watch manufacturer, currently part of the LVMH group.

Foundation in the year 1860

Edouard Heuer founded his watch manufacture in 1860 in Saint-Imier. In 1867 the company moved to Bienne, and the series production of chronographs began in 1882, as Heuer receives the first patent for a timer mechanism. In 1887, Heuer invented the oscillating pinion, which is still used today by well-known watch brands. This heritage is reflected in period advertisements, which note that the company is a specialist in simple and complicated chronographs and repeaters, as well as jewels for watches and jewelry.

In 1911, Heuer presented the first board chronograph for vehicles, called “Time of Trip”. By 1913, the company was advertising the production of bracelet watches with 11 and 13 ligne movements as well as 19 ligne pocket watches.

But Heuer's primary product was stopwatches. The company patented and produced the “Micrograph” in 1916, the world's first stopwatch with a precision of 1/100 seconds. And the company was the official timekeeper at the 1920 Olympics in Antwerp. It was also timekeeper in 1924 and 1928, as well as at numerous ski races. In 1933 Heuer developes the first board watches for racing cars and in the same year the legendary stopwatch Autavia. The first use of the familiar pentagonal logo came in the 1930s, with use in advertisements by 1934.

The first chronograph wristwatches appeared in the 1920s, with “Chronographes-Bracelets” advertised as early as 1922. A more modern wrist chronograph was delivered by 1940 with two pushers and subdials at 3 and 9. By 1946, Heuer had introduced the legendary Ref. 2406 chronograph watch.

The Solunar model of 1949 is the first watch with a tidal display. It is followed by the 1950 Mareograph-Seafarer, the world's first chronograph with tide indicator and dial for regattas.

In 1958, Jack W. Heuer, great-grandson of the company founder, begins his involvement in the company. He would be closely associated with the brand for decades.

On 1 January 1964 the watch manufactures Heuer and Leonidas, Saint-Imier merge to Heuer-Leonidas S.A., with Jack W. Heuer as Managing Director. In the following years Jack W. Heuer is crucially responsible for the development of new models and directs the brand consistently towards sports timing and a sporty image. Heuer becomes the epitome of time measurement in car racing.

At the 1964 held rally “Carrera Panamericana Mexicana” the Carrera is launched as the first chronograph with a functional dial. For Jack W. Heuer the ultimate goal in the development of this model is optimal readability of the display. To this end, he provides the shrink ring in Plexiglas with a five-second scale. This increases the dial by nearly 2 millimeters.

The Carrera becomes one of the most famous sports chronographs of watch history and experiences many new editions and model variations - as a manual winding watch as well as with automatic movement.

The 3rd March 1969 marks the release date of the famous calibre “Chronomatic”, developed as result of a joint project of Breitling, Leonidas, Hamilton/Büren and Dubois Dépraz in the race for the world's first automatic chronograph movement, which is presented to the global public. However, Zenith/Movado had been one step ahead with their presentation of the 'El Primero', which had already happened on 10 January of the same year. 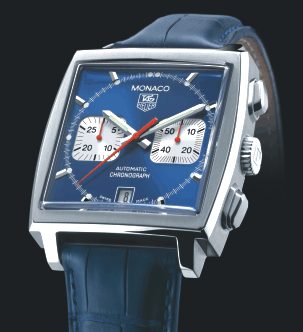 1969 the model Heuer Monaco enters the market as the world's first waterproof automatic chronograph with square case. The watch gains a big reputation by the racing movie “Le Mans” with Steve McQueen. Responsible for professional appearance of the timekeeping in this movie is a Heuer employee named Gerd-Rüdiger Lang, who already worked for the company since 1964 and later, from the early 80s, becomes well-known as founder and director of his own successful watch brand Chronoswiss.

Heuer is appointed as official timekeeper and equipment supplier for the Scuderia Ferrari by Enzo Ferrari (1971-1979).

1975, while quartz watches are preparing to dethrone mechanical watches, the “Chrono Split” enters the market as the world's first quartz wristwatch chronograph.

1983 Heuer launches the first quartz chronograph with analogue display. With the advent and spread of quartz technology mechanical stopwatches become superfluous, and Heuer finishes the production of these watches.

On 26 June 1982 the quartz crisis requires its toll by Heuer, and Jack W. Heuer is forced to the bitter decision to sell the company. First buyer is the luxury watch and jewelry manufacturer Piaget, a rather inappropriate choice; 1985 follows the resale to the Arab Mansour Ojieh of the Group Techniques d'Avant Garde (TAG). Since 1988 Christian Viros leads the company resulting form merger with TAG and now named TAG Heuer SA. In the fall of 1996, the company is brought to the stock exchange.

1999 the company is taken over by the French luxury goods producer Louis Vuitton (LVMH). 2001 Jack W. Heuer is appointed honorary president of the brand and receives also a position as a consultant. In honor of his life's work on the 2nd February 2007 he receives the “Gem Award” from the JIC (Jewelry Information Center). 1)

Current corporate strategy: Replicas of the classics as well as innovations 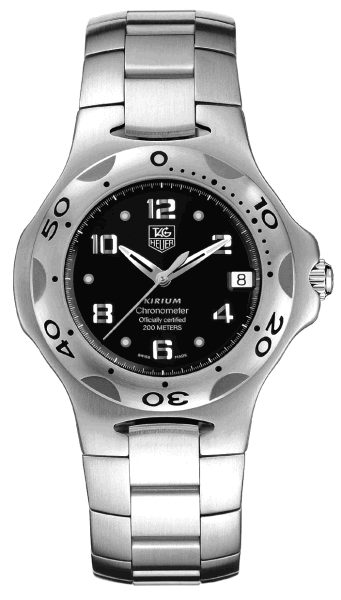 After mechanical watches, especially in the luxury and upper-class, again hold their own ground against quartz watches, the brand under Christian Viros reflects on its previous successful models and their unforgettable tradition. So there are many replica editions of classics like the legendary Carrera, Monza or Monaco in the series Heuer Classics, such as the Targa Florio or the Monaco Steve McQueen Edition.

Through the common homeland of TAG Heuer with the watch manufacture Zenith in the LVMH valuable synergies can also be used, especially the movement manufactoring competence of Zenith. There are also movements such as the Calibre 36 (derived from the Amplitude of 36,000 of the underlying El Primero-calibre) in the range of TAG Heuer.

In addition, the company is working intensively on new developments. It was at the BaselWorld 2004 that the concept watch Monaco V4 was presented with a totally new constructed mechanical movement. Here the basic principle of the power transmission works on the basis of 13 toothed belts instead using gears as in previous mechanical movements.

At the BaselWorld 2005, with the Calibre 360 Concept Chronograph the world's first high-beat mechanical wrist chronograph with an accuracy of a 1/100 second. It includes two different movements, one of which is an automatic movement and the other a hand-wound chronograph movement with an amplitude of 360,000 A/h, both controlled through the same crown.

But not only in the technical field, but also in terms of advanced design, the company is very agile. The Kirium, designed by Jörg Hysek and launched in 1997, showed new ways in the design of watch cases by intertwining the watch and the bracelet to a homogeneous unit. Also the Link series is regarded as a trendsetter due to their typical bracelet design.

Broad attention was attaind by the marketing campaigns of the company. First the motto “Do not crack under pressure” was launched, then “Success. It's a Mind Game”. 1995 TAG Heuer receives the prize for the best advertising in Cannes. The following ad campaigns are “Inner Strength” and “What are you made of?”

Currently, the marketing of the company is mainly oriented towards the so-called “brand ambassadors”, consisting of very popular figures from the cinema and sports business. Here the focus is less on the watch itself, but rather on the person who bears it.

TAG Heuer is tied with Van Cleef & Arpels and behind only Audemars Piguet, Vacheron Constantin, and Piaget in terms of the number of awards held from the prestigious Grand Prix d'Horlogerie de Genève as of 2020.

150th anniversary and series production of the Monaco V4

Matching the occasion of the celebration of the 150th brand anniversary, the launch of the Monaco V4, presented as a first draft in 2003, offered a worthy setting. The completely redesigned movement, in which the spring force is not transferred by means of wheels, as has been customary before in virtually all watches, but with the help of toothed belts, had already stunned the specialist community as well as the general public. Hardly anyone had thought possible that this invention would reach the production stage. But the sensational debut of the Monaco V4 as a sales model took place in autumn 2009 high quality housed in a platinum case, limited to 150 copies, at a price of 70,000 €.

Other new releases for the 150-year anniversary are the reissue of the classic chronograph Silverstone and the presentation of the new chronograph calibre 1887 with automatic winding, which is produced entirely in-house.

With the “Pendulum Concept” there is another innovation the first mechanical movement without hairspring. Instead of the traditional hairspring it has an “invisible” or virtual spring on a magnetic base. The device takes the form of a harmonic oscillator. Four high-performance magnets with a 3D control based on complex geometrical calculations generate a magnetic field which provides the linear restoring torque for the balance oscillations. The movement is entirely mechanical and does not contain any electronics or driven actuators. The magnetic field generated by the magnet remains constant over decades.

2011 with the Mikrotimer Flying 1000 Concept Chronograph the world's first and only mechanical chronograph is presented, which accurately measures and displays periods up to 1/1000th of a second. The oscillation system is pulsing 3.6 million times per hour, ie 125 times faster than most existing chronographs and 10 times faster than the Carrera Mikrograph 1/100th Second Chronograph. For this new technology, 11 patents were filed. 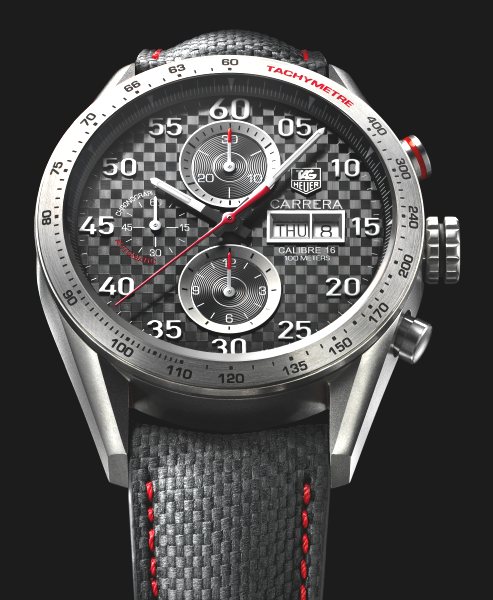 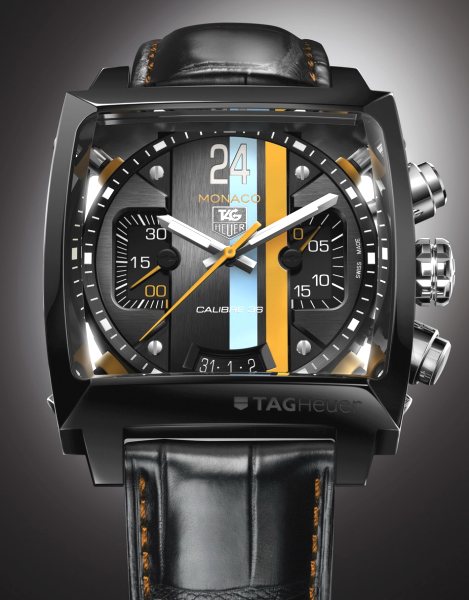