Leonidas is a Swiss watch company.

The Leonidas Watch Factory traces its origins to 1841 in Saint-Imier, was merged with Heuer in 1964, and the brand was retired after the company became TAG Heuer in 1985. It was a large-scale producer of chronographs and stop watches and is associated with the Bourquin and Jeanneret families and Beau-Site area of the town. The brand was typically written as “Léonidas” through the 1930s, though the acute e was rarely used after this.

The Leonidas company traces its roots to the year 1841, when Julien Bourquin began selling watches in Saint-Imier. Bourquin is listed in Indicateur Davoine as early as 1842 in the town, along with Calame (no longer listed after 1844) and Fs-H. Bourquin (noted as “Maison à Londres” and appears to relocate to La Chaux-de-Fonds soon after). Bourquin Frères appears in 1847 and 1848, and Julien continued to be listed alone beyond this date. In 1867, Bourquin's production is noted as “fabricant … et aroenterie et bijouterie” (maker of watches, silverware, and jewelry) and his address is shown specifically at Grand Rue 6. Julien Bourquin appears to have died in the 1880s.

Ferdinand Bourquin is listed as successor to Julien Bourquin in 1886. He had worked in Russia, selling watches to the aristocracy there and establishing the Bourquin name alongside those of Paul Buhré, H. Moser & Cie., and Breguet. Once he took over, Julien expanded the family business with workshops in Poland and Russia and the establishment of new brands, La Populaire and Léonidas.

The first advertisement for Ferdinand Bourquin appears in 1895 and declares this is “Ancienne Maison Julien Bourquin Fondée en 1841”, leaving little doubt to the continuity. Bourquin lists La Populaire as his brand at this time, and specifies that he specializes in anchor watches of beauty and quality in 13, 16, and 19 ligne sizes, along with chronographs and stop watches.

In 1901, Ferdinand Bourquin relocated to Rue des Roses 2, a growing factory also used by Ernest Degoumois at that time and the future home of the Fluckiger dial company. Bourquin was constructing his own workshop in the Beau-Site area across town but he died of a heart attack on March 5, 1905, before the new factory opened.

The Léonidas name first appears in 1902 in an advertisement for Ferdinand Bourquin's Fabrique d'Horlogerie Beau-Site. It is clear that this brand is used primarily on precision 18 ligne anchor watches, a higher-end product for the company that also produced stopwatches and cheaper patented chronographs as well as a variety of La Populaire watches.

In 1903, Leonidas is advertised being solely represented by J.-H. Jeanneret, and the company is shown to produce chronographs, stop watches, and extra-thin watches. It appears that Jeanneret had purchased a share of the company at this time, though this is not well documented. Leonidas no longer advertises in La Fédération Horlogère after 1904 but the company undoubtedly continued in operation. The company secured design patents in 1907 and 1908 under the name, “Leonidas Watch Factory, Vve Ferdinand Bourquin” suggesting that Bourquin's widow was still in control of the company at that time. A 1909 patent shows only “Leonidas Watch Factory”, and the other patents were reassigned that year as well, suggesting a change of ownership.

The mounting social trouble in Russia placed sales pressure on companies like Leonidas that focused on the market. But a more serious crisis grew in 1910 as their bank, Banque Populaire de Bienne, faced a shortfall and was no longer able to extend credit. Leonidas boss Jules Javet attempted to continue production but was soon arrested on charges of embezzlement and fraud. Although he was ultimately exonerated, the company was liquidated in 1911 at a substantial loss.

Watchmaker Constant Jeanneret-Droz, one of the three sons of the Excelsior Park founder Jules Frédéric Jeanneret, established Manufacture Junior by 1902. The company sold anti-magnetic watches, likely based on Fritz Moeri's patent along with electrically illuminated and powered clocks. Manufacture Junior was legally known as “Jeanneret-Droz”, as seen in design patents from 1903 and 1904. Junior was located at Rue du Pont 16, across the railroad tracks from the large Usine du Parc and Usine Fritz Moeri factories.

Junior licensed a patent for winding and time setting mechanism from Charles Perrin-Debrot of Saint-Imier that year, suggesting that they were manufacturing their own watches and not just re-selling Moeri's watches. In addition to Manufacture Junior, Constant Jeanneret-Droz also became a wholesaler for chronograph movements produced by LeCoultre in Le Sentier, a curious activity for a Saint-Imier company.

Junior's product line expanded by 1907 to include higher-quality 17 and 19 ligne watches and American-style 16 ligne movements in addition to the 19 ligne anti-magnetic movement. The company also boasted of producing steel, silver, and gold cases with excellent quality.

In 1911, Constant Jeanneret-Droz purchased the assets of the Leonidas Watch Factory. He had intended to buy the factory as part of a consortium but outbid his own group when it became clear that no other buyers would drive up the price. He almost immediately turned management of the company over to his son Charles Jeanneret, who would run the factory for decades.

Jeanneret merged Leonidas with the Junior brand, and this appears to have displaced La Populaire as the lower-priced brand. They produced precision anchor watches in both normal and ultra-thin models and specialized in chronographs and stop watches and also produced 1 and 8 day automobile dashboard watches, which was a trend at the time. We see the first advertisements for a Leonidas wristwatch in 1916. The Junior brand is last seen in advertisements in 1919, though the name would be taken up by Helvetia in the 1930s.

In 1930, Charles Jeanneret purchased Berna out of bankruptcy, with the latter taking residence along with High Life at Beau-Site 8. Berna at that time specialized in stop watches and chronographs as well, and was differentiated by their patented parts container which was encased inside the movement. This combination was initially publicized as “Leonidas et Berna” but the two companies were advertised independently after 1932. It is likely that Berna was the junior brand to Leonidas, just as Junior and La Popular had been in previous decades.

Leonidas worked with ebauche manufacturers Valjoux, Venus, ETA, and others and produced high-end watches for men and ladies, complicated watches (chronographs and full calendars), and precision timers and stopwatches. After World War II, Leonidas emerged as a fine watch brand, but this quickly faded and the company re-focused on the mainstream market. By the 1960s, Leonidas was focused on mass-market chronographs, stopwatches, and simple watches. The company had become the leading Swiss stopwatch company in America, leaving little space in the market for other brands.

Young Jack W. Heuer saw Leonidas's business as complementary to his family firm. He acquired the company, and on January 1, 1964 the combined firm became Heuer-Leonidas. Berna remained in the hands of the Jeanneret family, and Leonidas became the junior brand to Heuer through the 1970s.

Heuer-Leonidas faced difficulties in the late 1970s and a stake was acquired in 1982 by Nouvelle Lemania. TAG invested in 1985 and it became TAG Heuer. The Leonidas brand was retired around this time. 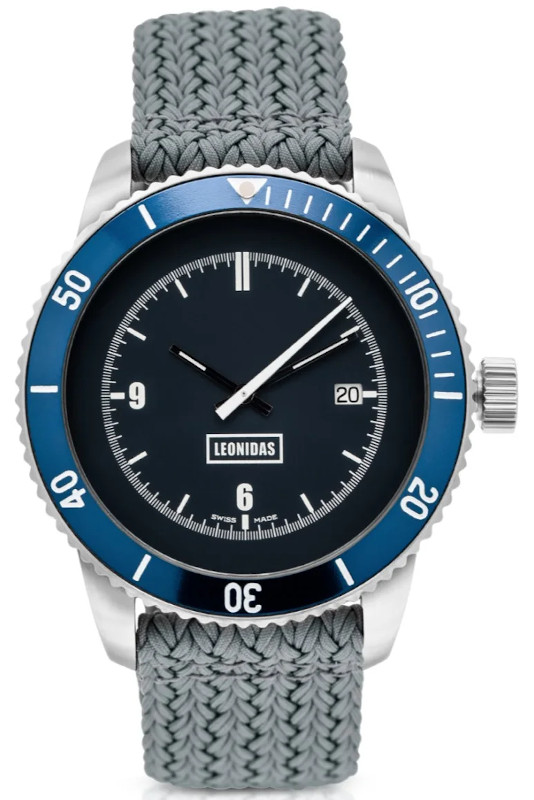 A new Leonidas Watch company was established in 2015, selling retro-themed watches reminiscent of the Heuer-Leonidas line. As a commitment to the brand history it was promised never to use a movement powered by a battery.