A watchmaking businesses was set up in Saint-Imier by members of the Jeanneret watchmaking family around 1866, and this would be the predecessor to Excelsior Park.

The originator of the line is Jules-Frédéric Jeanneret. He is listed as a finisseur in the outskirts of La Chaux-de-Fonds, an area called Reprises, in 1866, and this is the date traced by many of his family firms. He came from Dombresson, though his family was originally from Valangin. In Dombresson, Jeanneret married Cécile Sandoz, and the couple had two daughters and six sons, all of whom became watchmakers. Three of Jules-Frédéric's sons would be especially notable: Henri founded Excelsior Park, Albert founded Moeris with Fritz Moeri, and Constant took over Leonidas.

Jules-Frédéric Jeanneret's initial firm was bankrupt by 1868, but he persisted. The following year, Jeanneret moved to Rue de la Malatte in Saint-Imier in partnership with Edouard Fallet. The firm was known as Jeanneret et Fallet starting in 1869, and relocated after 1871 to 34a Rue de Tramelan. Jeanneret et Fallet is listed there from 1873 through 1882, indicating the extent of this partnership. The firm is called Jeanneret et Fils from 1883 through 1886, as Jules-Frédéric and Edouard go their separate ways and until Jules-Frédéric's death. After this, Cécile would continue the firm before handing it over to his nephew Samuel Jeanneret, but the house at Rue de Tramelan would continue to house the Jeanneret family firm for decades.

By 1890, advertisements list Vve. Jules-Fréd as a specialist watchmaker focused on interchangeable components and chronographs. By this time, Jeanneret had registered the Pigeon brand and had won a silver medal at the Anvers exposition in 1885.

It is said that Jules-Frédéric Jeanneret and his brother in law Fritz Thalmann purchased the steam-powered factory on Rue du Pont known as Usine du Parc in 1885. Soon his oldest son Albert moved his family to the house on the property, leaving Jules-Frédéric at 34a Rue de Tramelan. The Jeanneret brothers also established a second factory known as Usine Centrale just up the hill from the family home at Rue de l'Hôpital 4.

Albert worked with his brothers, Henri and Constant, at Usine du Parc as Alb. Jeanneret & Frères for a few years before leaving to start his own firm with Fritz Moeri. The company is listed as successor to his father's Jeanneret et Fils by 1889 even though that company continued in operation. After Albert changed his focus to Moeri & Jeanneret in 1892, Henri and Constant's firm was simply called Jeanneret Frères.

The operation at 296 Rue du Pont advertised that it used a steam plant to power its production machines, with the slogan “usine (a vapeur) du parc.” This company boasted of winning the 1885 silver medal, advertising its use of the Colombe and Diana brands, the latter registering a wild hog as a logo image.

Both Jeanneret firms of Saint-Imier advertise in Indicateur Davoine from 1890 through 1892, three advertise through the turn of the century, and four are listed after this.

The Jeanneret watchmaking dynasty expanded in 1904 as Constant left to focus on his brand, Junior. Thus, Henri Jeanneret-Brehm renamed the company at Usine du Parc for his own alliance name, Jeanneret-Brehm & Cie. First mentioned in 1902, Jeanneret-Brehm would become the predecessor to the well-known company, Excelsior Park.

This complicated history left four different companies operating in Saint-Imier, all claiming to have been “fondée en 1866”, as a 1902 advertisement in Indicateur Davoine shows. Given that all were descended from Jules-Frédéric Jeanneret's family, this claim is understandable if somewhat inexact.

By 1902, Jeanneret had registered the Excelsior name for 18 and 19 ligne chronograph movements, and noted in advertisements that these were intended for “Italie et Portugal” watches. Excelsior also produced “Compteurs de sport”, 30-minute stopwatches.

Jeanneret-Brehm purchased the Magnenat-LeCoultre factory in Saint-Imier in 1911 with financial assistance from the Gallet company. He had previously registered the Excelsior name but added the English “Park” at the suggestion of Gallet to make their products more accessible to English-speaking buyers.

Jeanneret-Brehm & Cie. became Les Fils de Jeanneret-Brehm in 1918 as his sons became more involved. One son, Robert-Henri Jeanneret, took over management that year and would manage the company through the 1960s. In 1925 the company is simply called Excelsior Park, though the people of Saint-Imier continued to refer to the factory as Usine du Parc for decades.

Henri Jeanneret-Brehm died on August 4, 1932 at the age of 76. He had long suffered a painful illness. The firm remained in family hands, however. In their place, Robert-Henri Jeanneret managed the factory before turning it over to his son, Robert-Edmond Jeanneret, grandson of Jules-Frédéric. He oversaw the end of Excelsior Park, with closed shortly before his death in 1985.

From 1918 through 1983, Excelsior Park manufactured a range of stopwatches, branded watches, and watch movements for Gallet, Girard-Perregaux, and Zenith. The company focused on timing movements, including stopwatches and chronographs, and was quite successful in the post-war period. Their chief competitor (especially for business with Zenith) was Martel and their close partner, Universal.

Excelsior Park faced many difficulties and nearly ceased operations in 1975 as the American market, which made up as much as half of the market, switched to cheaper Asian or electronic timers. Still, production in Saint-Imier continued until March 31, 1983, when the company sent all the workers home and stopped production. Although companies like Gallet and Revue Thommen were able to purchase some remaining stock, the brand and factory went unclaimed. The company was finally liquidated on December 12, 1985, shortly after the death of fourth-generation president Robert-Edmond Jeanneret in May. The name went to Flume Company of Germany who were unable to revive it. 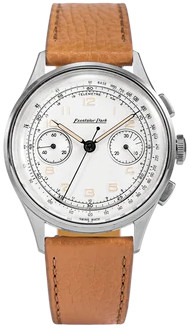 German toolmaker Flume purchased the respected Excelsior Park brand in 1986 and attempted to revive the company after the quartz crisis. Their offerings relied on leftover Valjoux 7740 and Chronomatic movements rather than classic Saint-Imier products and the firm found little success. The brand was later owned by an American company.

In 2020, the Korius group purchased the brand and is currently in the process of another revival. The first watches were delivered in 2022 and use Valjoux-derived movements produced by Sellita. They sell in the entry-luxury price band below US$ 4,000.