Girard-Perregaux is a Swiss watch manufacturer, currently part of the Kering group. 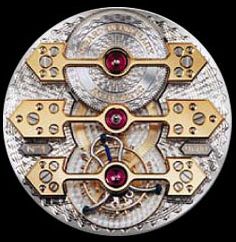 The manufacturer Girard-Perregaux is one of the few truly authentic Swiss manufactures. The company draws not only from a big name in the past, neither is it some anonymous flagship of a holding company, but since the beginning of its existence, it has been active with high quality in the area of continous development of the mechanical watch.

In the year 1852 Constantin Othenin Girard founds the company Girard & Cie. Two years later he marries Marie Perregaux, and from the fusion of their names and through collaboration with Henri Perregaux in 1856 in La Chaux-de-Fonds the manufacture Girard-Perregaux is created. The aim of the manufacture is the production of precision watches.

Between 1866 and 1876 Girard-Perregaux wins several awards at chronometer competitions of the Observatory of Neuchâtel.

From 1880 Constantin Girard developes wristwatches for the German naval officers on behalf of Kaiser Wilhelm I. and then manufactures two thousand of them - which thus become the first mass-produced wristwatches ever. Unfortunately not one of the original series has been found anymore - that would certainly have been of great value to collectors of today -, so for the company's museum one copy had to be reconstructed according to the original plans.

1903 Girard dies. His son Constant Girard-Gallet takes over the management of the company. In 1906 he additionally purchases the company Bautte, founded by Jean Francois Bautte. Because this talented watchmaker, guillocheur, case maker and goldsmith had already begun to sign the watches with his own name in the year 1791, Girard-Perregaux since then counts this date as the beginning of its history.

In 1920 years the company specializes in wristwatches. In 1928 Otto Graef acquires the majority of shares in Girard-Perregaux. In 1930 for the first time more wristwatches than pocket watches are sold. About 1940 the brand Girard-Perregaux is very successful both in Europe and America, especially with the waterproof model Sea Hawk (see below). The brand MIMO (Manufacture Internationale de Montres Or), however, is at this time mainly active with sales on the European markets.

1957 the self-winding movement with Gyromatic is presented to the public. 1966 Girard-Perregaux introduces in the Gyromatic family the first high-frequency movement with 36,000 A/h.

Girard-Perregaux tracks the progressive development of the quartz watch technology very consistently and in 1970 can thus address the industrial production of quartz wristwatches as the first company in Switzerland. The frequency applied of Girard-Perregaux is 32,768 A/h, later this becomes the international standard for quartz watches.

Facing challenges in the face of the quartz crisis, the company was sold to Asian distributor Desco von Schulthess in 1979. This made it a sister to Desco's in-house brand, Maurice Lacroix through the 1980s. A bold advertising campaign focused on high-end quartz in Japan followed, but this was not a success. Desco sold the majority stake to General Manager Francis Besson in 1989. Besson re-focused the company on ​​mechanical watch movements, and his efforts were enough to stabilize the company. Since Girard-Perregaux still builds its own movements into the watches, the company can count with full rights to the handful of reputable manufactures that exist today.

1991 a wristwatch version of the legendary tourbillonpocket watch with three gold bridges is presented. In the meantime this is one of the most popular wristwatches with tourbillon at all.

1992 the Italian entrepreneur, architect and former racing driver Luigi Macaluso takes over the management of the company. As a watch importer who had already introduced GP in Italy a long time ago, he boldly took the chance that came his way, and bought the company from Francis Besson, who had taken it over only a few years earlier from the Zurich trading house Desko of Schulthess. By agreement with Ferrari, a line of Girard-Perregaux Ferrari models was created, and between 1994 and 2004 also a collection of sports models and Grandes Complications.

Massimo Macaluso, son of the proprietor, is responsible for the subsidiary company Daniel JeanRichard (later Jeanrichard).

The major watches collections of GP 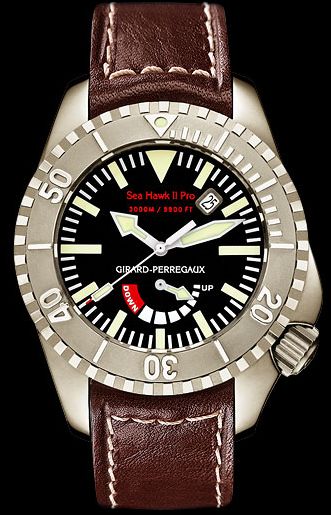 In 1945 Girard-Perregaux had brought a rectangular Art Déco model to market. In 1995 this model experiences a renaissance under the name Vintage 1945. Vintage 1945 is so successful internationally that of this model a Lady series and a column wheel chronograph with automatic winding is derived, and even a magnificent Model with automatic tourbillon and with a gold bridge or even with 3 gold bridges.

The 1993 started Richeville series includes models with elegant tonneau shape, in the variant as a mechanical chronograph with automatic winding or as self-winding watch with small seconds. 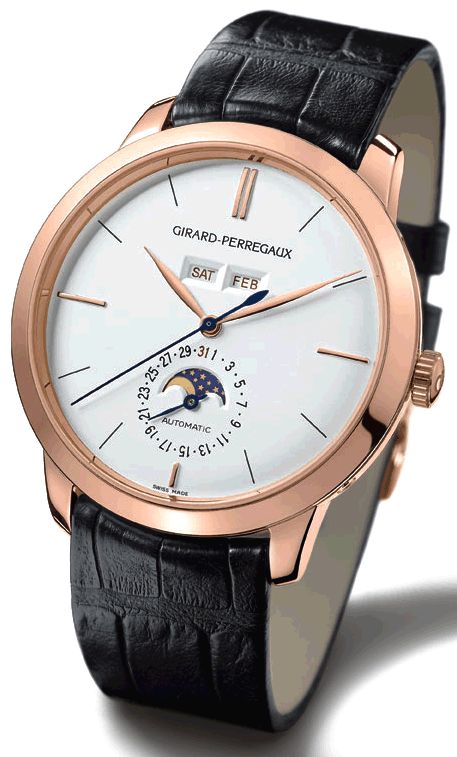 The Sea Hawk series goes back to the 1960s and 1970s of last century. It gradually developed to a series of dive watches. After the 2nd World War the name “Sea Hawk” was taken for watches that have been used for active operations, particularly in products for the marine and shipping.

The collection Girard-Perregaux 1966 contains simple watches which have the very elegant design and style of the 1960s, including not only a very elegant three-hand watch, but also the so-called “Fleming-Watch” with full calendar and moon-phase indication. (The name refers to the description of just such a clock, which the James Bond author Ian Fleming had published in his classic “From Russia with Love”.)

In 2003 Girard-Perregaux presents the third evolution of the 1975 created collection “Laureato” under the name Laureato EVO 3. The case design adapts the classic theme of the octagonal bezel, but in softer lines than before, which is also true for the integrated bracelet. The new version contains a mechanical chronograph movement with automatic winding and several complications including perpetual calendar.

The series ww.tc (the acronym stands for World Wide Time Control) is a world timer with a high recognition value - a stylish automatic chronograph in the luxury class with time zone indication.

The company refreshed its Laureato line in 2016 to compete with steel sports watches like the Audemars Piguet Royal Oak and Patek Philippe Nautilus. A perpetual calendar model was added at SIHH in 2019.

In the manufacture-owned museum, the Villa Marguerite acquired in 1998, the milestones in the history of watchmaking can be admired, especially pieces of the brand itself. (In the summer of 2007 was broken into the museum and there were almost all watches stolen, worth several million Swiss francs. 48 hours later, the watches were secured by the police.1))