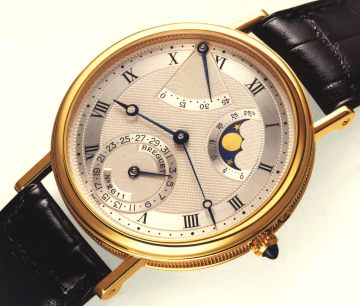 Breguet is a Swiss watch manufacture, currently part of the Swatch Group's Prestige and Luxury division.

The name of this famous luxury watch manufacturer comes from Abraham-Louis Breguet, who is considered the foremost watchmaker and inventor in the history of the watch. The appearance of the watches still has the basic features of the models made by Abraham-Louis Breguet classic, often guilloché dial with Roman numerals, Breguet hands and cannellated case in solid gold. The brand Breguet is one of the undisputed top brands in the highest-priced segment of the watch market.

Abraham-Louis Breguet founded a watch workshop in Paris in 1775. Initially the focus was on the finishing of foreign ebauche movements, but soon followed the production of pocket watches with his own movement, oriented at Lépine. In 1798 Breguet presented his free escapement with “constant pressure” at a national exhibition. From this time his success could not be stopped any more. Even Tsar Alexander, during a visit to Paris, used the opportunity to visit the studio of the great maître.

In 1808 Breguet's son Louis entered the firm as a partner and continued business after Breguet's death. From then on the manufacture was called “Breguet et fils”.

After the death of its founder in 1823 the manufacture, under the guidance of his nephew, Louis-Antoine, last direct descendant of the Breguet family, adapts the name “Breguet Neveu & Cie”. He begins a collaboration with Edward Brown, an Englishman, who becomes the sole owner of the manufacture in 1870. From generation to generation the manufacture under the Browns often relocated their headquarters.

1970 the company is acquired by the two Parisian jewelers Jacques and Pierre Chaumet, which again want to manufacture watches in the spirit the founder. After they go bankrupt, Breguet in 1987 comes into the possession of the firm Investcorp. The watch movements are now supplied by the Nouvelle Lemania.

On September 14, 1999 Breguet together with the Nouvelle Lemania is taken over by the Swatch Group. Today the watch production is performed in L'Abbaye in the Vallée de Joux (canton of Neuchatel).

Breguet produced “around 30,000 watches” in 2013 according to company President, Marc Hayek.