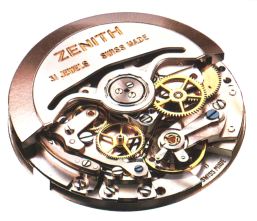 A high-beat movement is one with a faster-than-ordinary oscillating wheel. Commonly, “high beat” is only used to describe movements oscillating faster than 28,800 A/h, though Seiko has used the derivative term “Hi Beat” to refer to 28,800 A/h movements.

Most Swiss watches today beat at 21,600 or 28,800 A/h, giving 6 or 8 beats per second. This number is commonly divided by two to give cycles or Hertz, so these may be called 3 or 4 Hz movements, respectively. The oscillation rate of a movement puts an upper bounds on the precision at which it can be read, however. This is most obvious when used in a stopwatch or chronograph, especially a rattrapante movement marked in units smaller than one second. Without special engineering, such a watch can only show increments of time equal to the beat rate.

For this reason, manufacturers began to develop high-beat movements. One of the first was the 1935 introduction by Minerva of a 360,000 A/h movement, Calibre number 42. This allowed the sweep second hand to complete one sweep each second with 1/100 second precision. Girard Perregaux introduced a 36,000 A/h movement in 1966.

The Zenith El Primero was another famous high-beat movement. Introduced as the first automatic chronograph in 1969, this movement beat at 36,000 A/h, giving it the potential for 1/10 second precision. Later Zenith watches would feature “Striking 10th” capability, allowing the chronograph to exploit this capability.

Seiko is also well known for marketing “Hi Beat” watches. Originally, Seiko used this term for anything faster than 21,600, including their 28,800 mechanical movements. Today, the company only uses it on their 36,000 A/h Grand Seiko models, though they did produce one 43,200 A/h “Super Hi-Beat” model in 2008, the $600k Credor GBBX998. The Spring Drive chronograph from Seiko could be considered the ultimate high-beat movement since it has no escapement and can thus measure any sub-second increment.

In 2005, TAG Heuer introduced a dual-escapement chronograph featuring 360,000 A/h capability. In 2011, TAG Heuer introduced the Mikrotimer Flying 1000, oscillating at 3,600,000 A/h and capable of measuring 1/1000 second increments. They doubled this in 2012 with their Mikrogirder, which dispenses with a mechanical pendulum or escapement and uses electronic 1,000 Hz bladed oscillators, giving a frequency of 7,200,000 A/h. The chronograph hand sweeps the dial at a blinding rate of 1,200 revolutions per minute. TAG Heuer also introduced a high-beat tourbillon in 2012, the MikrotourbillonS. It includes two tourbillons One is a one-minute design with a 4 Hz magnetic balance, while the other serves the chronograph, rotating every five seconds at 50 Hz.

In 2017, Zenith introduced a silicon regulator with no balance wheel, capable of incredibly high-frequency operation. This was commercialized with the 2019 Zenith Defy Inventor, which operates at 18 Hz or 129,600 A/h thanks to an escape wheel with flexibly silicon teeth.