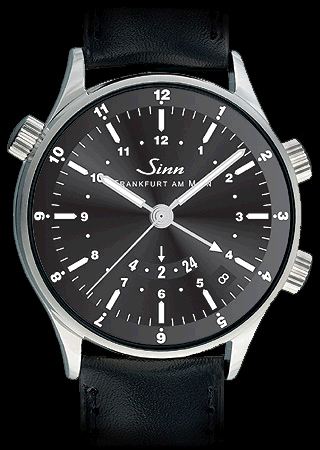 The original Model 6000 Frankfurt Financial District Watch was an automatic chronograph but the company added the four handed Model 6060 late in 2001. Both watches have an independently adjustable hand for a second timezone with an internal rotating bezel for a third.

This Model 6066 was the third model in the family. Like the others, it has an independently-adjustable GMT hand, but it adds an alarm as well. The movement, made by Jaquet SA is an update on the AS 5008 called the Jaquet 5900. Unlike many alarm watches, the alarm uses a 24 hour scale located in a window at 6 00. The movement, visible through a sapphire display caseback, features a “bull and bear” motif on the rotor.