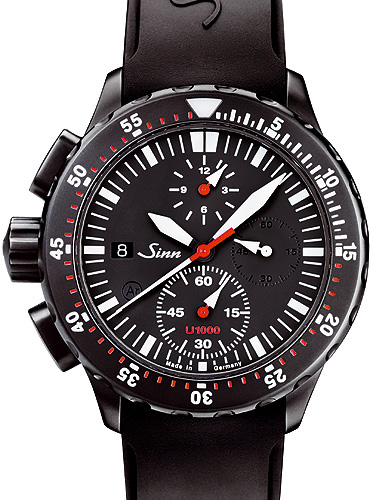 The Sinn Spezialuhren GmbH & Co. KG was founded in 1956 by Helmut Sinn. Mainly pilot's watches and chronographs were produced, which could be offered through direct sales at unbeatable prices. In September 1994, Helmut Sinn sold his company to the former IWC staff and engineer Lothar Schmidt. Afterwards Helmut Sinn was owner of the brands Guinand, Chronosport and Jubilar.

Lothar Schmidt set new accents by putting new inventions and technologies at the service of the durable and robust watch. Thus, some models are equipped with an argon gas filling, which improves the indoor climate of the case and extends maintenance intervals. Similarly, the dehumidifying technology works by means of a copper sulphate capsule, which absorbes the humidity occurring in the case and signals the saturation level of the capsule by an integrated color display.

Some of the dive watch models with quartz movement are equipped with a silicone oil filling. Thereby the case better withstands the high external pressure acting on the watch at greater depths. In addition, the filling provides a better readability of the dial under water, because it avoids the usual, annoying reflections.

Another, now patented invention of the Sinn research is a completely oil-free Swiss lever escapement. In addition, they developed a special heat-resistant oil that can even accomplish its task at an extreme temperature range between -45 degrees and +80 degrees Celsius. Also in the field of magnetic field protection and scratch resistance of case materials (tegimentation), Sinn offers new solutions.

Also there is, matching to the company's headquarters in Frankfurt on Main, the Frankfurt Financial District Watch (Finanzplatzuhr).

Newer models are the Taucherchronograph U1000 (diver's chronograph) with a case in tegimented submarine steel, the expedition watch 900 Hummer (Chronograph) and the Regulateur 6100, which with his technical style is purposely simple and straightforward in contrast to many traditional regulator watches.

The Sinn Spezialuhren GmbH & Co KG contributed significantly to the foundation and establishment phase of the Sächsische Uhrentechnologie GmbH Glashütte (SUG) (Saxon watches technology) by the allocation of commissioned production of cases. In addition, there is a lively and fertile, close technology transfer between the two prosperous companies in Frankfurt and Glashütte.

Sinn generously offers to any interested watch friend the opportunity to send the current catalog for free. Unlike other catalogs available on the watch market, this one is a real, comprehensive hardcover book that is not also written in the usual style of self-commendations, but - committed to the restrained and modest, no-nonsense style of the company owner Lothar Schmidt - has to offer a wealth of interesting information and in part reads like a textbook. To anyone who is interested in mechanical watches at all, the reading of this book is strongly recommended.

In addition to direct sales, where you get the watches ordered directly from Sinn by post and to your view, in recent years there has been built an increasingly dense network of so-called “deposits”. These are watch shops that have a part of the total supply of Sinn watches in stock. Of course, for the interested watch enthusiast, if he is nearby, this is the best way to get oriented on the spot.