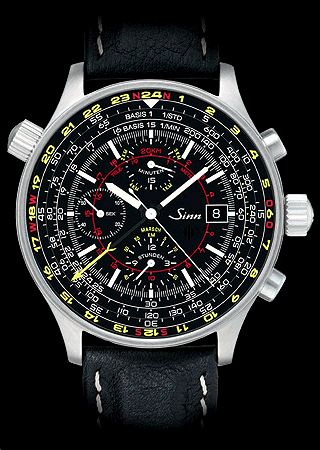 The 900 is an automatic chronograph by Sinn produced since 2004. It was initially marketed as a field watch but transformed into a pilot's watch by 2011.

The expedition watch model 900, beneath a second timezone, presents many time-based units on the smallest space.

Seen from the outside to the inside, the following data can be read or set

To make the Sinn 900 an adequate companion for auto testers and tour friends, Sinn engineers have engraved on the caseback the tire/speed indices and the most important conversion scales for European and American units, such as liters/100 km in miles/gallon.

In 2009, Sinn introduced the 900 Pilot, a variant on the 900 with an inner pilot's watch bezel using a crown at 10 00. The solid caseback on the Pilot features an English/metric conversion chart. The Pilot model has magnetic resistance to 80,000 A/m. All non-pilot versions were retired by 2011, shortly after a PVD-coated “Pilot S” was added. A DIAPAL version was added in 2013 with the same pilot's watch bezel.