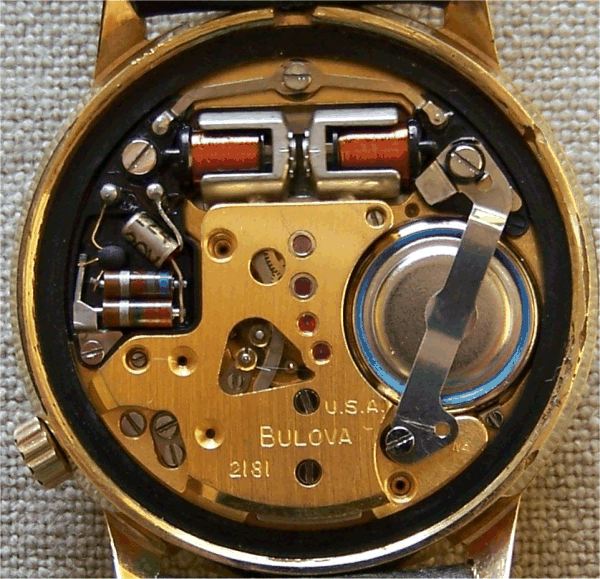 The Bulova Accutron was the first electronic watch.

Swiss engineer Max Hetzel developed the tuning fork concept after joining Bulova in 1950. He created a working model in 1953, moving it to prototype stage in 1955. It was developed in secret, even as electric watches gained acclaim.

It was an important step in the development of electronic and quartz watches. Where quartz movements excite a vibration in quartz crystal for timing, the Accutron instead used electromagnets acting on a tuning fork. This tuned vibrating member oscillates at 360 oscillations per second (Hz), much faster than the balance wheel found in a mechanical watch (2.5-5.0 Hz). This increases the accuracy of the movement, allowing Bulova to guarantee a maximum deviation of +/- 60 seconds per month. This was far better than competing mechanical watches, causing a sales and publicity surge.

Experimental Accutron timers were used in early spacecraft in 1959, and in communications satellites starting in 1961. Astronaut Gordon Cooper wore a Bulova Accutron in orbit in May, 1963, the first of many uses in space. The best-known model of the Accutron line was the Spaceview, which set a new standard of technology and design. NASA used Accutron watches in the Gemini program, including models with 24 hour dials. The Apollo program watch included a 60 hour dial.

The second-generation Accutron movement, Cal. 218, was released in 1968. This was available with and without a date complication. A day/date model appeared the next year.

Bulova eventually licensed the technology to Ebauches SA (in 1968) and Citizen. Ebauches' ESA developed the "Mosaba" Cal. 9160/9162 based on the Accutron design that same year. This was part of their “Swissonic” line, which also included electric watches and early quartz movements. Notably, ESA used the Mosaba movement in a chronograph, Cal. 9210, which was the first electronic chronograph in 1972.

The tuning fork Accutron was a technology leader until the development of the quartz watch in the early 1970's. For a time, Bulova built a hybrid movement, the Accuquartz. But eventually, issues with reliability, cost, and power usage caused the tuning fork Accutron to rapidly lose favor. By 1980, Bulova had stopped production of this movement and was actively replacing tuning fork movements with quartz.

In the 1990s, “Accutron” became a brand name for high-end quartz watches from Bulova. Today, tuning fork Bulova Accutrons are in high demand by collectors, though they are difficult to find in working condition.