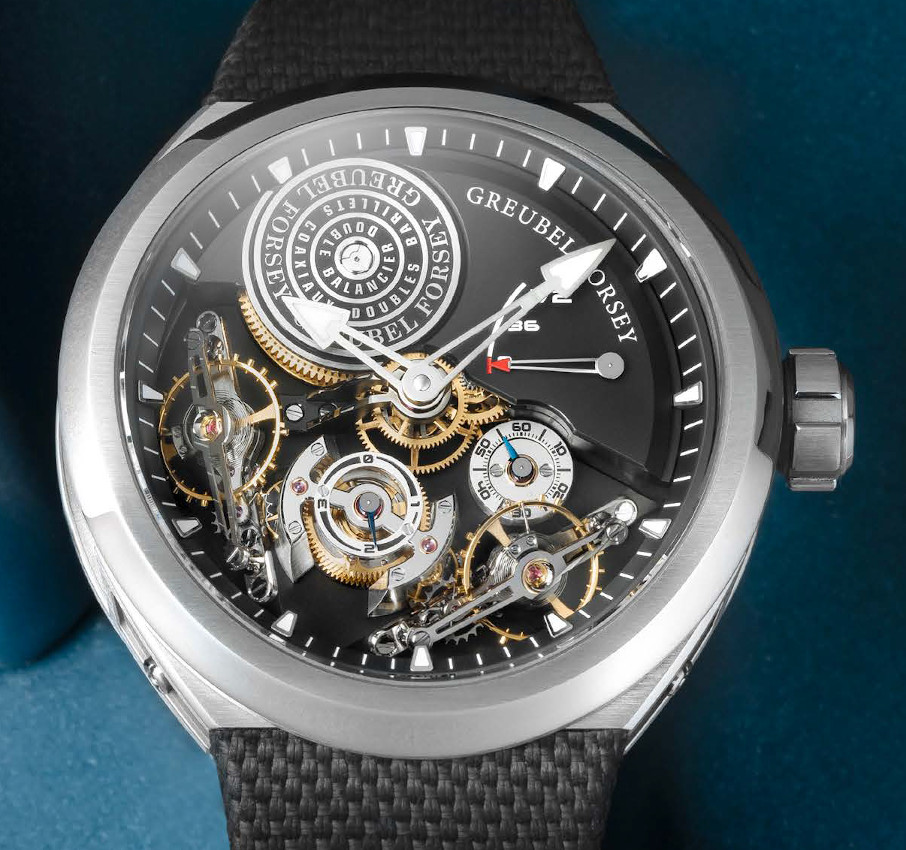 Double Balancier Convexe is a luxury wristwatch by Greubel Forsey.

The special feature of this watch, presented in March 2022, is the double balance (double balancier): two oscillating systems coupled via a differential, which contribute to an additional improvement in the rate precision. This invention was patented by Greubel Forsey and implemented in the Double Balancier model presented in 2007.

This was soon followed by a second iteration, this time in a six piece unique edition with the two regulating organs positioned in different three-dimensional planes and inclined at 35°.

2016 Greubel Forsey finally presented the invention in its current, double-patented form: The two balances are inclined by 30° and separated from each other by a constant spherical differential that calculates their average timing rate.

With the “Double Balancier Convexe” model shown here, presented to the public on March 17 2022, Greubel Forsey introduces a timepiece that emphasizes the spatial dimension of the Double Balancier. The three regulating organs (two balances, one differential) occupy more than half of the dial, providing unprecedented depth.

The timepiece gets its name from the convex profile of its 43.5mm titanium case. It’s plunginglines that hug the curve of the wrist raised significant technical challenges, requiring the sapphire crystal and above all the movement to adopt to this unique shape.

The gear train emerges from beneath the surface of what appears to be a semicircular blackened bridge, extending to the hour and minute hands above. The semicircle itself is asymmetrical due to an opening for the barrel cover, the central hour and minute indication, and an opening for the small seconds indication below. The engraved and lacquered minute indices have been integrated into the three-dimensional chapter ring, but the polished hour indices extend beyond the rim deep into the movement.

Each hand features its own geometry, finishing and color, depending on the function it is responsible for. The hour and minute hands have a curved profile and are filled with SuperLuminova. The small seconds hand and the hand of the 4-minute indication, which refers to the rotation speed of the spherical differential, are made of polished blued steel, while the power reserve is indicated by a polished open-worked hand with a red tip.

In the lower half of the Double Balancier Convexe, each regulating organ has been individually shaped. Despite their identical shape and function, the two balances occupy different planes.

The central bridge consists of several levels and is skeletonized. Blackened, polished and with several internal angles, it carries the hands for hours and minutes above the movement. The inclined escapement platforms are straight-grained with handpolished beveling and countersinks, while the differential bridge and balance wheel bridges are flat black polished with further hand-polished beveling.

The bridges and main plate of the Double Balancier Convexe were made of frosted and blackened titanium.

The two co-axial barrels in series with fast rotation (one revolution in 3.2 hours) drive a 374-component movement that offers a 72-hour power reserve indicated by a skeletonized hand.