The legendary IWC Mark XI aviator's watch was a “cult watch”. Produced from 1948 until the early eighties, the Mark XI was never available to the public. Sensing an opportunity in the 1990s, IWC introduced a civilian version in 1993, the Mark XII. But this was not the first civilian “flieger” from IWC. In 1988 the company introduced the Pilot's Watch Chronograph Mechaquartz model, with styling from the Mark XI and the innovative Mechaquartz movement from IWC sister company, Jaeger-LeCoultre. 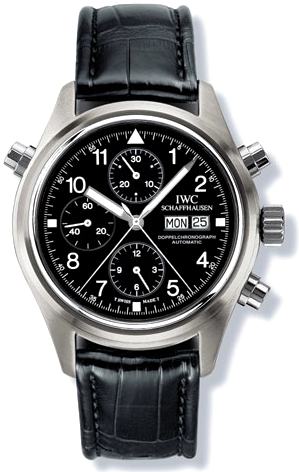 In 1992, IWC shocked the world with the first mass-produced doppelchronograph movement. This Pilot's Watch Doppelchronograph used a revolutionary movement designed by Richard Habring on the proven Valjoux 7750 base. The watch was similar in design to the Mechaquartz and previewed the look of the Mark XII that followed a year later. Like its predecessor, the dial was black with white markings. Luminous squares marked 3, 6, and 9, and a luminous triangle was placed at 12. The chronograph registers at 6 and 12 were understated, with a simple white circle around intermittent numerals, and the running seconds at 9 was marked only with simple lines at 5-second intervals and numerals for 20, 40, and 60. The dial was marked “IWC SCHAFFHAUSEN” above the white day and date windows and “DOPPELCHRONOGRAPH AUTOMATIC” below. The case was stainless steel, as were the pushers and crown.

The original Ref. 3711 had a domed sapphire crystal, but this was not in keeping with the styling trends of that decade. In 1996, the Ref. 3713 was introduced with a flat crystal. This would last through the end of production in 2005. The 3713 also had Super Luminova hands rather than tritium. All of these models used the same Cal. 79230 designed by Habring. A “Spitfire” version of the Ref. 3713 appeared in 2003. The original Doppelchronograph went out of production in 2005, but this long run would not be the end of the model.

In 2007, IWC introduced the 46 mm Pilot's Watch Double Chronograph Top Gun, Ref. 3799. It used the same movement as the original and had a similar dial design as well. One notable difference is the “triple” date window at 3 00 which was said to resemble an aircraft altimeter but has proved unpopular with enthusiasts. This also necessitated the move of the “IWC Schaffhausen” text inside the running seconds subdial, replacing the “60”. The Top Gun has a black ceramic case with contrasting titanium pushers and crown. The Top Gun Ref. 3799 was produced until 2011.

Also in 2007, IWC restarted production of the Double Chronograph as Ref. 3718. A new 44 mm case was 17.1 mm thick, and the signature model was the Spitfire. Additional models included “Le Petit Prince”, “Antoine de Saint Exupery”, and “DFB” along with special boutique editions.

In 2012, IWC introduced a new Double Chronograph line, Ref. 3778. These watches feature an updates movement named Cal. 79420, though it remains quite similar to the original. One notable addition is the “triple date” window as seen on the Pilot's Watch Mark XVII. A limited-edition “Patrouille Suisse” model was produced in 2014 with a grey dial. The case now measured 46 mm diameter and 17.5 mm thick.

In 2018, before SIHH 2019, IWC unveiled a new Pilot's Watch Double Chronograph Top Gun. Ref. 3718 features a 44 mm black Ceratanium case and is blacked-out to match The pushers and crown, caseback, and even the hands are black, matching the dial. Dark grey luminous material in the hands and markers provides the only contrast. The strap is made of rubber with a textile inlay. The case is not only smaller than the previous Top Gun, it is also 1 mm thinner at 16.8 mm. As of 2019, this is the only Double Chronograph model listed in the IWC collection.