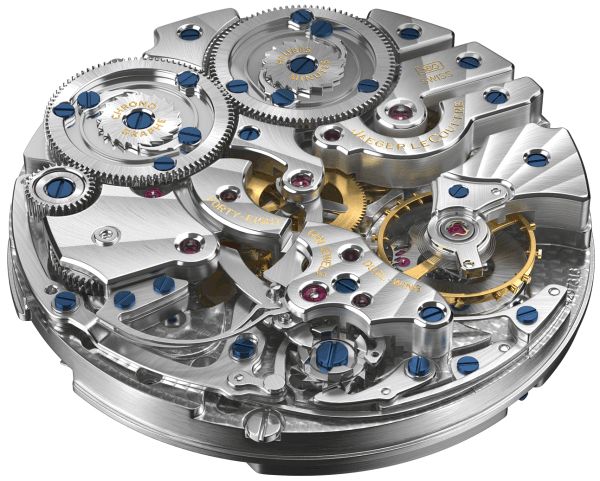 The JLC 380 is a watch movement from Jaeger-LeCoultre.

Introduced at SIHH in 2007 along with the Duomètre à Chronographe, “Dual-Wing” calibre 380 is unusual in that it features two barrels and two independent gear trains, joined by a single escapement and balance. One barrel and gear train powers the time display while the second powers the chronograph complications. The chronograph features Seconde Foudroyante in a 6 00 subdial, allowing measurement to one sixth of a second. Unusually, the time display is placed in a 10 00 subdial, with the chronograph time at 2 00. This corresponds to the two barrels of the movement. Two seconds hands are central and use the main dial, one each for time and chronograph. Dual power reserve indicators complete the complications. The barrels are wound independently by the crown Clockwise for timekeeping and counter clockwise for the chronograph.

The JLC 380 is an extra-flat manual winding chronograph movement with, 21,600 A/h, 48 jewels, screwed balance with gold weight screws, Incabloc shock protection, and 50 hour power reserve. It is made up of 445 pieces. It is related to the “Grande Complication” JLC 182 movement, perhaps the most complex ever made to that point.