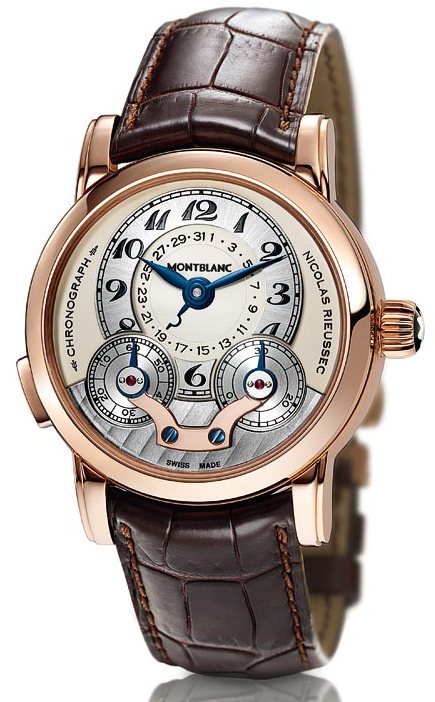 The Star Nicolas Rieussec Monopusher Chronograph is a wristwatch by Montblanc.

After Montblanc had taken over the traditional manufacture Minerva, whose rich expertise has been used for the development of a new chronograph calibre. The MB R100 works with manual winding, while the MB R200 is self-winding.

At the same time the opportunity was seized, to name the new, in April 2008 presented watchmaking creation after the inventor of the first “time writer” with ink, Nicolas Rieussec, because his name had not yet been taken by the industry. 1821 Rieussec had presented his chronograph construction in France.

The unusual thing about this chronograph is the representation of stopping times per disc instead of hand - which therefore comes closer to the actual meaning of the word “chronograph”, namely “time writer”. Also the invention of the French had been using rotating disks, which were marked by pressing a button with ink. With this device, Rieussec followed the desire of the French King Louis Philippe, to determine the exact time for individual horses in horse racing.

As another special feature the Chronograph has only one pusher (“monopusher”) and is therefore particularly easy to use.

With this remarkable and stylish new development Montblanc has suddenly catapulted itself to the forefront of the watch manufacturers.